When Schneider Electric Elite Partner 4Trust began working with Omantel on the Oman Data Park project in Muscat their choice of infrastructure supplier was a key strategic decision. Omantel wanted to work with a supplier for their critical power and cooling infrastructure who could also deliver world-class scale, technologies and best practices that could be incorporated directly into the data center development.

Oman Data Park (https://www.omandatapark.com/) is the first managed services provider in Oman, with a mission of making IT simple and efficient for customers, enabling them to focus on their core business. The data center is a joint venture between 4Trust and Omantel (https://www.omantel.om/), who have been a leading player in Oman’s progress and national development. Omantel is the first telecommunications company of Oman and the primary provider of Internet services to the nation.

Ben Selier, Technical Manager at 4Trust, explained the importance of the relationship between the two companies as well as the stature of the Schneider Electric brand in leading Omantel’s decision-making, during an interview I filmed with him at Schneider Electric’s recent “Power to the Cloud” event in Dubai. 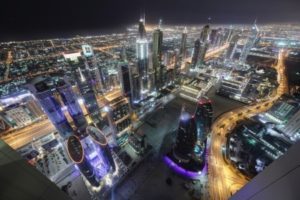 He told me that 4Trust had come into the project initially at the design stage, but that its involvement had expanded to include turnkey construction and operations of the facility, eventually leading to 4Trust taking part ownership. The completed first phase of the development has been certified Tier 3 with a possibility to step up to a Tier 4 certification at a later date.

During the construction of the facility, all of the air conditioning units, the flooring and the main panels were all selected from the Schneider Electric catalog. Ben Selier explained that choosing Schneider Electric brought a number of benefits to the project, not least of which are the credibility and comfort of working with a large and well-known global brand. A large proportion (about 80%, according to Selier) of the infrastructure was delivered by and with Schneider Electric, including all AC’s, the flooring and the main panels. Both power and cooling within the facility are also Schneider Electric solutions, and this had the additional benefit of giving confidence to both the developers and the customers for the new facility.

Additionally, aspects of the equipment also brought further benefits. For example, the smaller footprint of Schneider Electric air conditioning units over the competition allowed more data center white space for equipment cabinets, improving the overall economics of the facility. Heat is a major issue in the region with air temperatures reaching over 50 degrees Celsius, so highly effective cooling is critical for the data center.

Continuity of power supply can be an issue in Oman, so the design and specification of the data center has required a slightly different approach to power to allow for this. Ben Selier explained that the power supply to the facility is generally stable and reliable but when outages do occur they can take several days for the supply to resume. With only one electricity provider in Oman, it was very difficult to attempt a 2N power supply. For the Oman Data Park the developers built their own transformers to achieve a 2N rating. The facility is also managed using Schneider Electric StruxureWare for Data Centers DCIM.

The development has been extremely successful, and with over 70% of the facility’s 196 equipment racks now occupied, the second phase of the development is now well under way to be completed within a year of opening. The second phase is seeking to deliver 30 racks at 30kw per rack and again Schneider Electric is working to help share best practices to help ensure success.  4Trust will be visiting other Schneider Electric customer facilities around the world to share knowledge and experience during this next phase of development.