Those numbers came from a presentation by Andrew Jay, Head of Data Centre Solutions for Europe, the Middle East and Asia for the commercial real estate firm CBRE. His talk at the recent Schneider Electric International Colo Club meeting in London painted a clear picture of a growing colocation market with lots of opportunity.

The biggest market by far is the U.S., particularly Northern Virginia, with 949MW of data center capacity, followed by Dallas/Fort Worth (360MW), Chicago (293MW), and Silicon Valley (264MW).  In addition to those four, CBRE also tracks markets in Phoenix, Atlanta and Seattle. Altogether, the markets account for 2700MW of capacity. 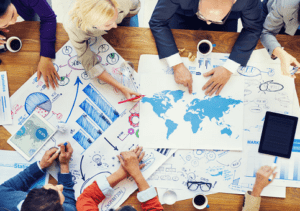 The four largest markets in Europe – London, Amsterdam, Frankfurt and Paris – collectively have about 1,032MW of capacity while Singapore, Hong Kong, Tokyo and Sydney account for 796MW of capacity in the Asia-Pac region.

“We often look at North America to see what’s happening there, because [the same thing] is going to happen – bet your bottom dollar – in Europe within 18 months to 2 years and then subsequently in Asia-Pac,”Andrew said.

In that case, there should be substantial growth in Europe and Asia-Pac in coming months and years. And that is in fact what’s happening.

Andrew cited Milan as an example, as it’s gone from 6MW to 30MW of capacity in the last 2 years, much of it from three colocation providers: Data4 Group, Aruba.it, and Supernap.

“They’ve all been fairly successful, they’ve all done transactions, these are not white elephants,” he said. “They’re building on a modular basis. It’s all quite sensible, driven by the strong demand.”

Istanbul was another interesting location Andrew cited, noting Turkey has 80 million people but only 58% Internet penetration. The current colocation market stands at about 15MW but he says hyperscale providers (meaning Internet Giants like Amazon, Microsoft and Google) are starting to talk about it, viewing it as a gateway to the East. And with so much untapped Internet market potential, “it’s going to go only in one direction,” he said.

Looking at a map of where hyperscale data centers currently exist shows there’s lots of room for growth there, as well. Currently they tend to concentrate in the same areas, such as the Northwestern U.S. and Northern Virginia, and a handful of markets in Europe and Asia-Pac. But large swaths of the globe, including all of Africa, the Middle East, and most of South America, remain untapped.

“For me, that’s the next part of the story – how are we going to penetrate those areas?” Andrew said. The issue presents lots of questions, such as how voracious the hyperscale providers are going to be and, importantly for colo’s, how they’re going to procure space.

Tapping into Hyperscale and Vertical Markets

In general, he says he sees lots of correlation between growth in hyperscale/cloud data centers and colocation demand. “It’s no surprise we’ve seen colocation grow aggressively – 20% increase in colo capacity in the last 12 months in Europe, and that’s mirrored in Asia, with the U.S. just a shade less,” he said.

Andrew also talked about some emerging colocation players and how they’re having success by tailoring services for various customers. He pushed back against the notion that colo’s are all essentially offering the same plain vanilla services. Ecosystems are cropping up around different vertical markets, he said, with colo providers offering services customers find attractive enough to pay a premium for. Interesting stuff.

We recorded Andrew’s presentation and are making it available for all to see. If you work at a colocation company and want to get a sense for what the global market looks like, I encourage you to take 30 minutes to watch the video.