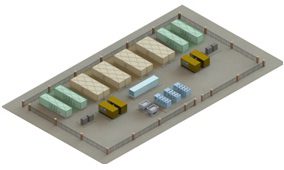 System level design:  When a data center is designed with prefabricated power, cooling, and IT modules, the design work becomes much more “system-level” when compared to the engineering that goes into designing a data center built from separate products and parts.  Imagine buying a car where you need to separately specify the starter motor’s mounting arrangement, the number and pitch of gear teeth, torque and temperature rise of various heat producing components, and so on.  When something is prefabricated, it is expected that the components within the modules are well matched and well integrated.  Specs like pipe and wire sizes, the pressure drop of valves, and pump sizes are pre-selected and installed to meet the performance characteristics of the modules. Everything is implemented and tested in the factory as a complete system.  Communications and controls are ready to function when the module is delivered.  All of this means design time is cut in half – from a typical 24 weeks to 12 weeks.

Classification as personal property: Because modules are assembled in a factory, they are considered a “product”, and not a basket of parts or pieces.  As a result, a prefabricated data center module is less likely to be considered a permanent part of the building and more likely to be considered a single piece of “personal property”.  This provides the owner with options that may prove financially favorable, such as depreciating it over a more appropriate useful life, or moving it from one site to another.  Barry also wrote a paper about tax benefits of modular infrastructure which goes into these and other benefits in greater detail.

In my next blog, I’ll talk about some of the “site prep” considerations.  Things like permitting, inspections, deciding on placement of the modules, foundations, and piping and wire interconnections.

What is Schneider Electric’s Strategy for Prefabricated Data Center Modules?