At a base level, hybrid cars get excellent fuel mileage for a simple reason: they don’t use the gasoline engine all the time. But in reality, the reason runs deeper than that and has parallels to technology that can similarly save lots of money on data center cooling: variable speed drive (VSD) compressors that help adapt cooling capacity to actual requirements. 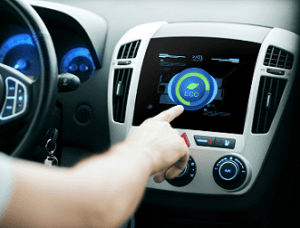 First, let’s look at how hybrid cars work. They all have a battery powered electric motor that runs the car much of the time, which not only saves fuel but allows for a more efficient gasoline engine design. Reducing demand on the engine means it doesn’t have to be as large as in a traditional car, and thus operates more efficiently.

Another way hybrids save fuel is with regenerative braking. As this story on the Union of Concerned Scientists USA (UCSUSA) web site says: Conventional cars rely entirely on friction brakes to slow down, dissipating the vehicle’s kinetic energy as heat. Regenerative braking allows some of that energy to be captured, turned into electricity, and stored in the batteries. This stored electricity can later be used to run the motor and accelerate the vehicle.

What’s more, some hybrids offer electric-only drive, where the vehicle operates entirely on the electric motor at startup and low speeds, or for a limited range, according to the UCSUSA story. The point is, the car uses the more efficient electric engine as much as possible, until it really needs the gasoline engine.

That’s quite similar to the way VSD compressors work alongside a data center economizer cooling system. Just as regenerative braking uses the friction inherent in the braking process to power the car, economizers use readily available outside air to cool a data center. When combined with an approach that uses higher data center temperatures, and newer adiabatic cooling systems to reduce dependency on mechanical cooling, inverter driven compressors make possible a “trim” cooling concept, where you cut back on the amount of cooling provided by traditional cooling compressors.

The trim cooling approach more accurately sizes mechanical cooling to handle only data center heat that’s not dissipated by the economizer units. It’s much like how the gasoline engine in a hybrid car only kicks in when power requirements exceed what the electric engine can deliver.

Consider a data center that requires 1MW of cooling capacity. Of that, on a typical day say the economizer system handles 800kW. When the temperature is colder, maybe the economizer handles 900kW of cooling, or on warm days only 700kW. With a trim approach, the variable compressor would compensate as needed, so the compressor is handling only as much cooling capacity as it needs to, just as the hybrid car uses the gasoline engine only when necessary. 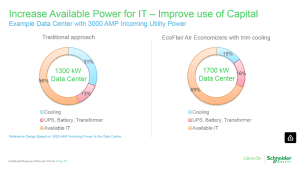 The impact of this approach can be dramatic, with savings of as much as 40% on cooling costs. But it goes beyond simply saving on electric bills. Because the data center won’t need as much cooling capacity from the traditional compressor, you can use a smaller compressor (just as the hybrid car uses a smaller engine), which lowers up front capital costs both on the unit perspective and on the electrical infrastructure too. What’s more, electrical infrastructure requirements are also reduced, since the compressor won’t be drawing as much power – again, lowering capital costs.

In the case of an existing data center, you could increase its IT capacity using the existing compressor and electrical infrastructure – thus allowing for more growth than you may have anticipated. For an enterprise, that means lower capital expenses, while for a colocation provider, it can mean supporting additional customers in the same IT space.

Taking the best advantage of the VSDs and trim cooling concept, of course, requires that you employ a cooling system that enables you to use economizer mode as much as possible. That’s where newer adiabatic cooling systems come into play.

To learn more about this type of cooling solution, visit our EcoflairTM Air Economizer site where you will find free white papers and resources. Also, check out the interactive model for Ecoflair and other cooling solutions.

Whatcha got under the (data center cooling) hood?