Lessons of Hurricane Sandy for facilities professionals who were tasked with overseeing operations in critical facilities — a term that this particular hurricane clearly redefined.

Building Operating Management surveyed readers in states affected by Hurricane Sandy, asking respondents to share success stories and lessons learned during and after the storm, both from power management and staffing perspectives.

The survey revealed that 10 percent of respondents shut down their data centers before the storm struck. However, 30 percent noted they did experience a power outage, with 65 percent of those being without power for two days or more, while the other 36 percent were in blackout conditions for three or more days. A total of 19 percent went a week without power. 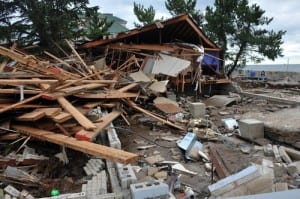 Staffing became an issue in areas hit particularly hard by the storm, as workers dealt with damages at their homes, as well as childcare issues from school closures. Some companies had to bring in workers from other states to fill temporary staffing needs in the aftermath.

As respondents noted, data back-up remains an essential routine task for any critical facilities, but that such things as on-site fuel tanks and generators and even knowledge of circuit numbers can make coming out of a bad situation a bit easier. The general theme of replies was one of preparation before disaster, rather than winging it during the actual weather situation.