Colocation providers have no shortage of opinions on how to deal with the various market requirements and customer demands they’re facing, from cloud players and demanding SLAs to data sovereignty and the Internet of Things (IoT). Get them in a room together and you’ll soon learn plenty about how they view the market (understatement!).

That’s exactly what Schneider Electric did at the International Colocation Club event in Paris, where more than 40 executives from colocation providers around the globe gathered to learn from industry analysts and, perhaps more importantly, one another. 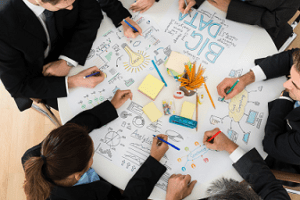 During a roundtable session that closed the event, we had attendees separated into eight groups, each discussing a different topic. In this post and the next, I’ll try to give a sense for the highlights of those discussions.

The group charged with discussing customer demands and expectations cited cloud players as their number one issue. Large cloud providers, including Internet Giants, are certainly driving more demand for colocation services. But they’re also dictating requirements and taking up huge amounts of space at very low cost, putting business plans at risk due to low returns on investments.

At the same time, customers of all stripes are demanding SLAs with financial benefits that offer good protection for customers.

To make out in the end, colocation providers need to have a value proposition, such as focusing on a particular niche. “We need to match customer expectations, which are different depending on the industry segment they’re coming from,” as one attendee put it.

Another issue colos increasingly must deal with is data sovereignty – and it’s a sticky one. “Data sovereignty was our topic and I’m not any clearer on it, but we had a good discussion,” joked one executive who was charged with leading the topic.

Providers are trying to keep up with various legal cases around the issue, such as the sovereignty of data stored in data centers outside of the U.S. Such cases influence where Internet Giants build their data centers. Some execs noted they see providers building in countries adjacent to those with the most restrictive laws, such as Taiwan to gain access to China and Nordic countries to serve Russia.

Laws in different countries in a region, such as in Europe, may be built on the same base regulation, but each puts its own spin on the rules, making it difficult for colos to keep up. (Although it didn’t come up in the roundtable, that will soon change with the adoption of the EU’s General Data Protection Regulation (GDPR), scheduled to take effect in May 2018.)

The varying rules can make it difficult to put contracts in place with Internet Giants, who want to impose SLAs with “penalties that are just astronomical and sometimes inhibiting to doing business,” as one executive put it.

For me, the big takeaway was that even if you’re in a location where data sovereignty isn’t a top of mind issue, it certainly is for any of your customers that are multi-national – which means you’ve got to be mindful of it, too.

Of course, no discussion about colocation market trends would be complete without touching on IoT and edge computing. The executives charged with this topic started their discussion by trying to decide whether IoT was just the latest buzzword or something more.

“We’re seeing a proliferation of devices that are going to generate a massive amount of data, so yes, it is something real,” reported the group’s representative.

The issue, then, is how to capitalize on IoT. That’s a challenge because colocation providers have spent years building large, consolidated data centers. “That’s how we’ve found we can run a good business and make good money,” the executive said.

But IoT is taking things in the opposite direction because it requires edge computing to collect data from all those devices. “It’s decentralization down to such a level that we’re even talking about single-rack facilities and single-compute instances,” he said.

Internet service providers and telcos are perhaps best suited to capitalize on the edge computing trend because they already have substantial infrastructure at the edge.

But for IoT to gain real traction, there must be business cases to support it. Roundtable participants noted we’re starting to see some of them, from driverless cars that generate lots of data, to healthcare, where all sorts of sensors and devices generate data, whether in hospitals or in individual patients’ homes.

To learn more about what your peers are thinking, download our free guide, “Opportunities and threats for colocation providers around the globe.” It’s based on a similar roundtable discussion we hosted with a different group of colocation providers – who not surprisingly addressed many of the same issues as the Paris group.