This is my software-defined truth; show me yours.

Our PR guy told me a funny story: About 12 months ago he was catching up with the knowledgeable editor of a leading data center publication. The journalist had just returned from the US where he had been visiting the head of data center operations at a large colocation service provider. He’d enquired what technology trends were being prepared for. Virtualization, came the response. A bit taken aback, the journalist said that he’d been writing about virtualization for over five years. Well, said the data center guy who’d clearly seen a thing or two, I can confirm it’s starting to have an impact now.

Opinion formers, ourselves at Schneider Electric included, have been talking about the software-defined data center (SDDC) for a couple of years now (here’s my SDDC video blog recorded in the summer last year). At this moment in time, I’d say that the industry is still some way from having agreed on a catch-all definition of SDDC. Although, as a data center infrastructure provider, we have lobbied hard to build on VMWare’s IT-leaning idea, in order to have physical resources like power and cooling included in its scope.

So there was a numbing inevitability about the recent release of an SDDC industry forecast written about in Fortune magazine: “A new report issued this week by Research and Markets explains that the software-defined data center market will hit $77.18 billion by the year 2020, which is up from the $21.78 billion it’s expected to rake in for 2015. The term software-defined data center generally refers to the way different elements of the data center—like networking, storage, and computing—can be more better dispersed with the help of software”.

I haven’t read the full document (you can buy Markets and Markets software-defined data center report by clicking this link – I’m not on commission!), but I’d say that this definition doesn’t come anyway near expressing the full scope of what comprises software-defined data center. I agree that (their words) “Software Defined Data Center (SDDC) technology helps enterprises to control and manage their active data centers and networking by reducing operating cost, increasing flexibility, scalability and becomes more manageable”.

However, that “the solution for satisfying the increased demand for resource pooling need of more data storage management, networking simplification and related data, storage and computing issues” would be selling the technology and its capability short. The definition sticks steadfastly to the IT requirement, and by doing so does not take us anywhere near the big picture – understanding the true cost impact of applications or services, from the CPU to the utility power inlet.

Secondly, I’d say that the revenues being forecast are big numbers and deliberately so, to impress upon potential beneficiaries the importance of what’s coming. However, you’d have to say that there’s a lot of double counting going on here, especially in the form of infrastructure which may or may not be a genuine part of any SDDC trend. Let’s face it, we’ve seen a lot of software-defined ideas being mooted over the last few years, not the least of which networking and storage. 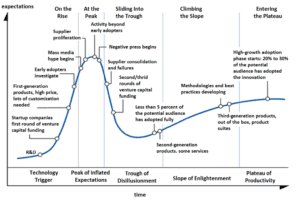 I’m going to take issue with the numbers as well as the hyperbole for the simple reason that I’ve been involved in a similar maelstrom over the past few years with DCIM. Here, the definition had to be broad in scope to support the idea of technological impact on a grand scale. That meant lots of other (existing) technologies had to be added to give substance (say, Asset Management). And we ended up, perhaps like SDDC, with a collection of ideas which in commercial terms, have not so far lived up to the to the success which was forecast.

My friend and colleague, Soeren Jensen has been quoting Gartner’s Hype Cycle extensively recently, in his blogs and in his meetings with customers and potential customers. While Virtualization and DCIM have both moved well beyond the Peak of Inflated Expectations, the market for the software-defined data center – assuming we can agree on what it comprises – is still anchored to its Innovation trigger and is therefore perhaps some way from widespread adoption. Let’s see what the next five years brings!

Is the Definition of the Software-defined Data Center Ambitious Enough?

If Hype Killed DCIM, What’s Next?