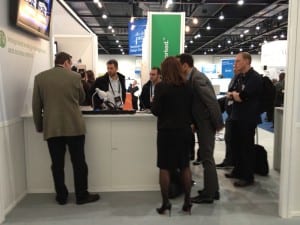 There was an interesting and pervasive buzz about the first day of Cisco Live EMEA in London yesterday and no, it wasn’t due to a noisy air conditioning system! It seemed to come from an unspoken yet shared belief, that something was about to happen. It was perhaps the same sense that anyone involved in sports has as they gather for any important fixture, whether they’re sponsors, players, managers or fans; something is going to happen.

At least an hour before the opening of the first conference hall, a crowd literally numbered in its thousands had gathered in the concourse of the ICC to make sure they’d got a seat for that first address which would kick off this week’s proceedings. Maybe it’s because it’s a new year and this particular community is optimistic to hear what Cisco and its partners have in store for 2012.

At the Schneider Electric booth it felt like a Formula One team on the first day of the season: Between the company providing the engines and aero guys, you just know that the team has got its hands on a fast and race-winning package. But now that the engineering and development groups have done their piece, it’s down to the driver and pit crew to make sure that the car gets over the line in first place!

The joint collaborative effort which lies behind yesterday’s announcement of three major new integrations between Cisco’s EnergyWise and Schneider Electric’s EcoStruxure has produced important new methods for companies to better manage their energy use throughout building, office and data center domains. As you’d expect from two market leading companies, the new solutions provide a convenient route to better corporate behaviour and cost savings; keeping business competitive, watching the pennies, and looking after the planet. You can read the announcement of the new Cisco and Schneider Electric solutions on the Schneider Electric website.

The steady stream of Cisco and Schneider Electric VPs and VIPs visiting the booth, taking a tour of the new solutions (a complete lap!), leaves you in little doubt that this a valued cooperation. You can also see from the live demonstrations that the two companies’ development teams have really put the subject of energy management under the microscope to help customers make the most of their resources. Of course the big savings that can be gained in the data center are there, but they’ve also considered the smaller details which can add up to big difference.

Now the technical experts have done their stuff; it’s time for the marketing, commercial and support professionals to come into play! From the moment that the booth team meeting finished, anticipation started to rise about what is going to happen during this week. The opening day of Cisco Live EMEA was like the green flag dropping to start that first race, and the excitement really was palpable. With companies like Cisco and Schneider Electric coming together there’s good reason to believe it’s going to be an interesting and exciting season.

Is it HOT in here, or is it just ME? Building Management Software and Cisco House in London