The Tech Vault Data Center in Burlington, VT, is quite a unique facility. It is certainly not the biggest, and it doesn’t have the lowest PUE (1.25-1.45) in the industry either, which already distinguishes it in two ways from many of the data centers I visit. Remember that I last wrote about visiting the SuperNap in Las Vegas, which could fairly be called “super huge.”

Instead of developing a super huge facility that could meet the needs of all comers, the Tech Group, a Burlington, VT-based IT service recognized the need for a disaster recovery/back up site among customers of its consulting service. According to Jay Fayette, until the Tech Vault started operations, Vermont lacked a commercial-grade internet service provider, carrier-neutral facility. 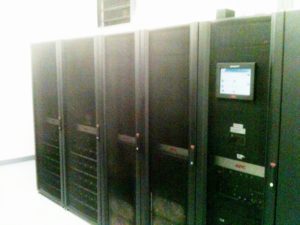 Fayette, a Tech Group principal and local builder, said that this simple observation led to the formation of Tech Vault, Inc. and its 6000 sq ft data center in South Burlington, Vermont.  According to Fayette, the newly formed Tech Vault undertook the challenge of designing and developing a data center that is now considered to be the most efficient data center in New England. Additionally, Tech Vault has applied for the U.S. Green Building Council’s coveted LEED Gold certification.

Tech Vault opened its doors on September 15, 2010 with several high-end customers online from day one including hospitals, health-care providers, and software companies. Other customers included Fayette’s construction business, which built the data center facility, within a building partially occupied by Tech Group.

“Our clients have high environmental expectations when it comes to choosing a data center,” said Bob Stewart, Vice President of IT for Tech Vault. “Environmentally-conscious companies in our region seek a secure, clean, energy-efficient facility with unlimited power and cooling capabilities for their business needs.” Tech Vault provides exactly that, in Vermont, where environmentally-friendly practices are a way of life in every sector of business. “We feel that we have created a facility that many companies will find congruent with their own business practices and vision, and we’re proud of that.”

At present, just one row of racks is filled, with servers just beginning to fill the second row. Racks will be added to other and populated as needed, and eventually interior walls could be removed to allow full build out of the facility, which would be 102 racks.
Until, the first phase is completed, however, the walls will remain in space, deferring the need to extend fire protection to empty space.

Tech Vault’s decision to locate in South Burlington suggests a bet on the local economy, with which Stewart and Fayette are both knowledgeable. An afternoon with Fayette includes a tutorial on the development of fiber networks in the state, which had served as a limited to similar development in the past.

Fayette also describes difficulties in securing the hoped for Gold LEED certification, which has met with some technical difficulties in breaching the 60-point threshold. While an appeal has been made to the USGBC, the points in dispute relate to the redundancy of bus lines serving the facility and local population density, which have little to do with the relative sustainability of a data center, particularly one located in a rural state. Even so, Fayette hopes to eventually receive LEED Gold for Tech Vault, which would also recognize significant efforts to manage energy in the facility.

Heslin is an award-winning editor with more than 20 years experience in the editorial departments of business-to-business and technical publications. During his career, he has written and spoken about topics including energy cost and reliability, electrical safety, and data centers. He can be reached at heslink@bnpmedia.com. Also you can follow him on Twitter @datacenteredit. Follow Mission Critical magazine at @mcritical.

Hyperscale Pioneers Talk What’s Next: How Long will this Market be the Market?

How Can Colocation Providers Capitalize on the Growing Market?