The latest in our TradeOff Tool collection is the Prefabricated vs. Traditional Data Center Cost Calculator, which can be an important tool during the planning phase of a data center project when the topic of prefabricated (containerized) data centers has been raised.  This tool can help illustrate under what conditions it may make sense to go with a prefab approach, and under what conditions it doesn’t.  Factors such as the starting and ending load, power density, space costs, and where modules would be placed (indoors vs. outdoors, for example), all influence the answer.

As with my other TradeOff Tool blogs, I wanted to share some background on the tool, in terms of its methodology, assumptions, and data sources, so that you can feel confident in using the tool as an input to your planning decision.

This tool uses the same fundamental methodology as our Data Center Capital Cost Calculator, which I described in my past blog.  It is a rough order of magnitude estimator (+/- 20%), so not a quoting tool.  We used a mix of Schneider pricing, 3rd party pricing, and partner and customer quotes to derive the subsystem costs, the density cost multipliers, the capacity multiplier, and the redundancy multipliers.  The reason for the multipliers is so that the tool can estimate a wide range of configurations, from small to large data centers, low to high density racks, different architectures, etc.

The key cost drivers that determine the approach that makes the most financial sense are:

The calculator provides a summary of the capex of traditional vs. prefabricated and demonstrates the percent difference.  There are also two bar charts in the results.  The first is an overview of the equipment, design/install, and space/building costs for each approach, and the other is a drill-down into the power, cooling, and IT spaces.

Some key assumptions used in our mathematical model were:

Take a few minutes and try out the tool; it’s great for guiding discussions around whether to go with prefabricated data center modules, and it’ll help justify the decision you make to management.  Remember, the full set of our Schneider Electric TradeOff Tools can be found here.  As always, feedback on our tools is encouraged! 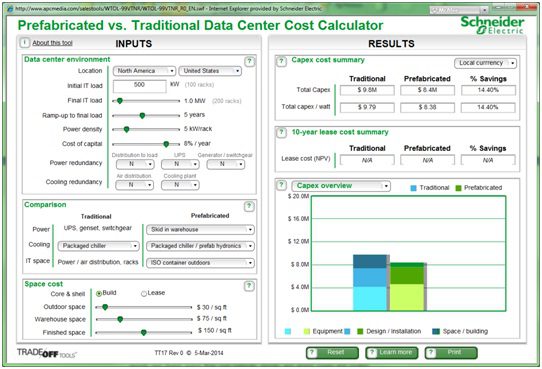