The drive is on to improve the sustainability performance of data centers with tools such as IIoT platforms, energy monitoring and management, and innovative cooling technologies. However efficient a data center becomes, the carbon footprint of the electricity itself will be the main factor in its environmental performance.

The exact amount of electricity consumed in data centers around the globe is a matter of debate. Recent estimates vary between 196 TWh and 400 TWh, depending on which survey you trust. That means data centers consume between 1 and 2% of global electricity demand – a significant figure. 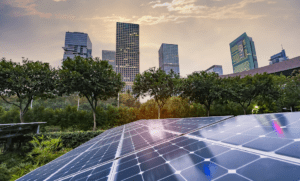 So, where is all this energy used? Servers and cooling systems account for the greatest shares of direct electricity use in data centers, followed by storage drives and network devices. According to the U.S. Department of Energy, some of the world’s largest data centers can contain tens of thousands of IT devices and require more than 100 MW of power capacity, enough to power around 80,000 U.S. households.

Moving away from fossil fuels

Increasing data center electricity demand is a concern because most electricity today is still generated using fuels with a high carbon intensity, such as coal and natural gas. Although significant progress has been made in the transition to clean electricity, the proportion of power generated via renewable sources is still small. For example, in the United States, renewables make up 20 percent of the total electricity mix. Even if new efficiency opportunities are found, switching existing data centers to low-carbon energy sources is essential to combat climate, environmental, and health effects.

In contrast, a PPA consists of a direct contract between a renewable energy supplier and a customer. The customer agrees to buy renewable energy for a fixed period at a defined price. PPAs can either be direct or virtual. With a direct PPA, physical delivery of electricity is guaranteed to the grid at a fixed price. Direct PPAs are preferred because the buyer can pinpoint the exact resources providing their power. By contrast, a virtual PPA will not physically deliver the energy to the buyer but will sell the power into the local wholesale market, which may be in a different location from the buyer.

Until the entire grid is fully decarbonized, the only way for a facility to guarantee that all the electricity it consumes is 100% renewable is to install capacity that is either onsite at the data center or connected nearby to the local grid. Adding new, renewable energy capacity in direct response to demand is known as additionality. It is a key concept in understanding the impact of products such as RECs and PPAs.

Those behemoths have the financial clout, scale, and control to achieve their renewable energy goals, but for colocation providers, it may not be so easy. This is not just to meet carbon reduction targets but for improved market credibility. A recent report from Node Pole shows cloud customers are increasingly likely to want to use a service powered by renewable energy.

A future role for microgrids

In the United States, Pegasus Group Holdings is developing an innovative microgrid project called The Hive in Arizona. The idea is to build a data center with its own dedicated 340MW solar farm on a 700-acre site. Also in the United States, in Connecticut, Energy Innovation Park and Thunderbird CHP are planning to redevelop four buildings of the former Stanley Black & Decker factory in New Britain into a 20 MW fuel-celled microgrid and data center.

To further explore approaches that can facilitate the adoption of renewable energy, including how microgrids can play a vital role in a green data center future, access Chapter 3 of the Sustainability Challenge eguide. This new eguide is a result of our collaboration with DCD and draws from the latest best practices and actionable insights to put you on the fast track to a more sustainable data center future.