If you listen to what major telco service providers are saying, review their coverage maps, and check the connection status on your phone, it seems that 5G has hit the ground running and almost everyone in developed countries already has it. But what about sparsely populated areas that are difficult to access? These areas do not have sufficient Return on Investment (ROI) for telcos to build out terrestrial (land-based) coverage.

Yes, I just used the word terrestrial. Have we reached the point in evolution where futuristic science fiction in space is a reality? Remember the Star Trek TV show opening, “Space, the final frontier”? Well it seems we are getting there, and pretty quickly. So much so that I am forced to make a distinction between infrastructure based in space and infrastructure based on the ground (terrestrial).

Signals are indeed beaming down from space to support our ‘terrestrial’ 5G infrastructure on Earth. The end result is that 5G networks will leverage LEO (Low Earth Orbiting Satellites) in their architecture, which greatly simplifies 5G deployments. With the combined space and terrestrial infrastructure, a seamless 5G experience can be delivered across the entire globe. LEO satellite constellations will supplement terrestrial 5G infrastructure to increase network coverage and provide a backup in the event of natural disasters like earthquakes, floods, and hurricanes.

Moreover, they will assist with the delivery of enhanced mobile broadband and next-generation IoT devices by providing higher data rates and lower latency across a constellation of satellites spanning the sky. To help make this happen, Schneider Electric is providing physical infrastructure solutions for MEC data centers and ground stations with our EcoStruxure Micro Data Centers and EcoStruxure Modular Data Centers. 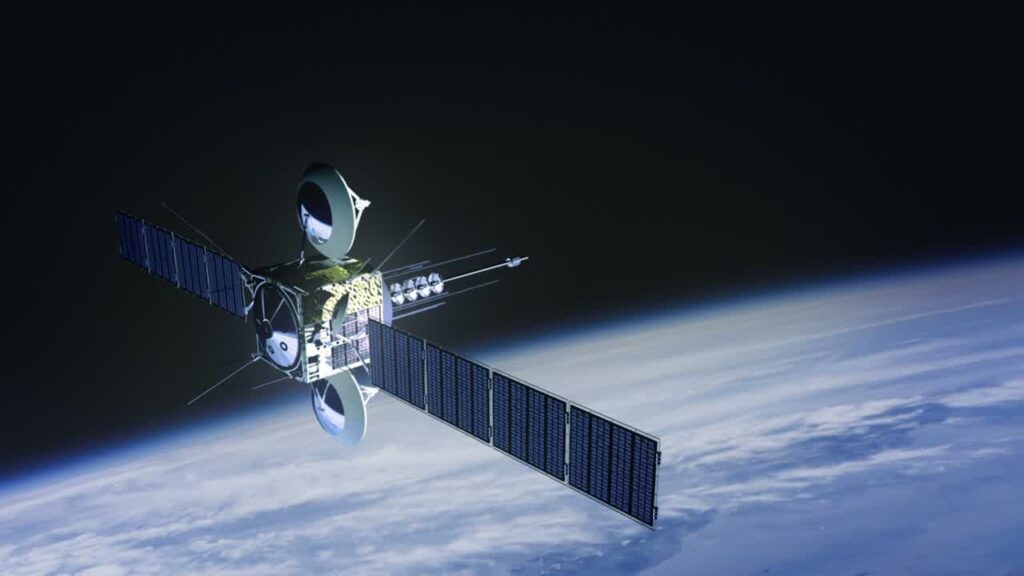 How will this 5G architecture work?

Let’s examine how this 5G architecture using LEO will be laid out. Many people are familiar with GEO satellites – these are geostationary and orbit 22,300 miles (35,800 kilometers) directly above the equator. They travel in the same direction as the rotation of the Earth. This allows ground-based antennas the ability to point directly at the satellite in a fixed position. In contrast, LEO satellites are miniaturized, orbiting versions that operate between 500-and-2,000 kilometers above Earth’s surface. Latency is significantly reduced as the satellite, due to its low orbit, is better positioned to quickly receive and transmit data.

The low orbit also creates a smaller coverage area, so LEO satellites continuously hand off communication signals and traffic across a constellation of satellites and ground stations. This ensures seamless, wide-scale coverage over a pre-defined geographical area.

In LEO-enabled 5G, ground stations collect and transmit data to a LEO constellation (uplink), and different ground stations receive the data (downlink) and pass it on to the intended receiver. These surface-based ground stations have 2 purposes: 1 ) provide real-time communication with satellites, and 2) serve as command and control centers for the satellite constellation. The LEO constellations require significant network management and benefit from advances in analytics and artificial-intelligence algorithms to reduce response times and operating costs. For years, satellite communication has remained stand-alone technology, independent of mobile networking. But that is all changing. The next generation of satellites are built to support 5G networks to manage connectivity to cars, vessels, airplanes, and other IoT devices in remote and rural areas. But one challenge is that a significant number of areas lack sufficient ROI for telcos to build out terrestrial or land-based coverage.

About 3.4 billion people worldwide lack internet, according to the GSMA. For many, broadband is unreliable or inaccessible where they live. SpaceX is looking to tackle that problem. In his keynote at Mobile World Congress Barcelona last month, SpaceX CEO Elon Musk shared that the aerospace company is pivoting its resources to create the Starlink satellite constellation, which will provide broadband coverage focusing on remote parts of the globe.

Musk told attendees to “think of Starlink as filling in the gaps of 5G and fiber” for the hard-to-reach 3-5% of world population. The satellite constellation can be helpful to Communications Service Providers (CSP) trying to acquire 5G licenses in countries where they must provide a certain amount of rural coverage.

Starlink is not alone. Some of the world’s best entrepreneurial technology companies are also in the game. Jeff Bezos and Amazon are planning to launch and operate a constellation called the Kuiper System. It will deliver high-throughput, low-latency broadband service to millions of underserved customers, airplanes, boats, and other vessels.

The first implementation of LEO-enabled 5G will most certainly play a key part in extending cellular 5G networks to air, sea, and other remote areas not covered by terrestrial networks. They could offer a seamless extension of 5G services from the city to airplanes, cruise liners, and other vehicles in remote locations. IoT sensors and M2M connections on farms and remote worksites like mines can also capitalize on the wide coverage areas offered by LEO enabled 5G. In addition, in the event of a natural or man-made disaster where terrestrial 5G infrastructure is damaged, satellite networks can take over and keep the network going, especially critical and life-saving communication services.