Data centers are the heart of the world’s digital transformation. By now, most people know this, and it reminds me of a quote – “Computing is not about computers anymore. It’s about living.” Nicholas Negroponte.

What is not clear is the toll our computer-aided lifestyles will have in the form of energy use. At the turn of the century, as the data center physical footprint was expanding exponentially to support the dot.com era speculation, many “experts” predicted that data center energy demand could surge and represent over 20% of all global demand – up from less than 1%. While Moore’s law was greatly in effect since the 1970s, “processor speeds, or overall processing power for computers will double every two years at the same power use” helped keep power use under control.

In the mid-90s, a new technology called virtualization became super popular. With virtualization, you could put 3-10 virtual servers into one physical server, downsizing the physical data center footprint and associated power use became commonplace. The original virtualization is a “heavyweight” application using hypervisors, meaning it took quite a bit of computing resources to operate. Newer, lightweight virtualization using containers, kernels, and microservices runs far more efficiently and uses less energy.

Looking forward, technical advancements are in play as well. Quantum computing for example, using Quantum bits (or “qubits”) made of subatomic particles, namely individual photons or electrons that can exist in multiple states simultaneously, at least until that state is measured and collapses into a single state. There is also a move away from rotating hard disk drive (HDD) technology to a static solid-state drive (SSD). The SSD uses a fraction of the energy an HDD uses, but it costs a lot more. Future storage technology emulating human DNA is in the works and can reduce energy use for storage dramatically. Many people are bullish about the process of encoding and decoding binary data to and from synthesized strands of DNA.

Building data centers with general purpose processors was the norm for decades until about three years ago. That’s when learning AI started to ramp up and needed faster speeds and leaned on GPUs. But graphic processing units used too much power and the industry started moving to application-specific integrated circuit (ASiC), which is an integrated circuit (IC) customized for a particular use, rather than intended for general purpose needs. For AI, ASiCs made for deep neural networks are now ten times more powerful and effective than standard GPUs and are known as Tensor Processing Units (TPUs). But, processing high volumes of data in hyperscale data centers usually requires the transmission of data that is physically far-away, which causes network congestion and costs a lot of money. This is one reason I believe large central data centers will be used mainly for data storage and processing will transition to the edge of the network in the form of edge computing in edge data centers. 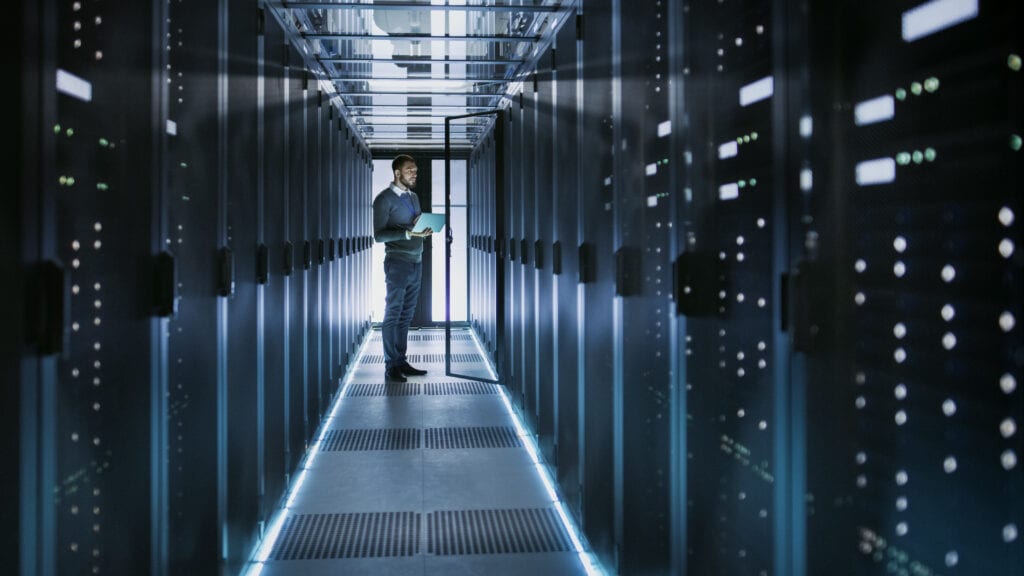 So, there you have it – the need for more processing and storage is driving the need for more and more data centers. Many will be very large hyperscale facilities designed and run by people who operate data centers for a living. On the other end is the need to build out smaller, micro sized data centers at the edge, deployed at scale, but for mainly telecom applications with energy efficiency not being a major focus. Then we have all of these emerging technologies that I mentioned that may or may not become mainstream and may or may not have an effect on energy usage.

We believe a tool would be helpful, to provide the user flexibility in making assumptions about data centers and the edge. Specifically… Long-term impact of IT on electricity consumption

We developed the forecast model after an internal Schneider Electric study highlighted the key risks associated with the rise of IT in terms of electricity consumption. “The long-term impact of IT on electricity consumption” was conducted in October 2018 by Ujjval Shah and Vincent Petit and it forecast the potential IT energy consumption required going forward and predicted the demand for information. This study looked at the growth of data then analyzed the IT equipment needed to support that data. In this tool, we included the study’s data on forecasted compute, storage, fixed networks, and network equipment to calculate the total data center and edge IT energy.