One of the main challenges hyperscale data centers face is power capacity shortages, as well as the need to reduce their environmental footprint. Gas power generation is one alternative for these extra-large data centers to obtain the power they need in a more environmentally friendly manner. In our newest white paper, we discuss the electrical distribution design for an on-site, self-generation solution. This design can be as reliable as traditional solutions (i.e., connected to utility with a diesel generator plant as back-up). It also reaches the same availability levels expected by larger colocation companies. This electrical design takes advantage of some of the beneficial characteristics of medium speed engines, such as short start and step load flexibility – capabilities necessary for using them in critical applications like data centers.

A more detailed explanation of the engine technology used in our design is detailed in the blog of the manufacturer and co-author of the above mentioned white paper, Wärtsilä. 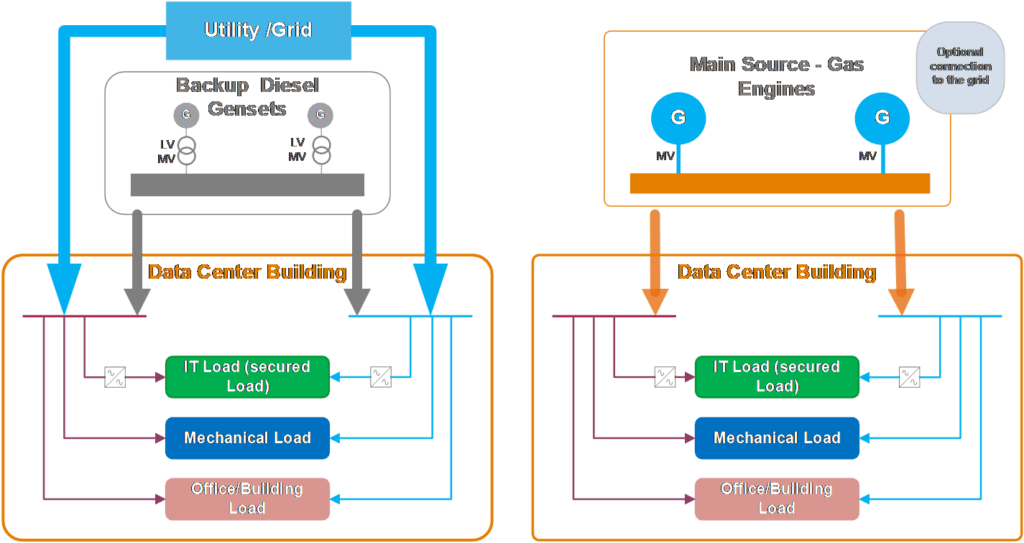 Changing the paradigm to natural gas and shifting the design from back-up generation to primary power generation pushes us to rethink the design of all the electrical systems from end-to-end while targeting what we consider acceptable by hyperscale data center owners in terms of availability. To achieve this, all the subsystems and auxiliaries were studied and subsequently designed to avoid any single points of failure (SPOFs).

For this we dedicated some of the auxiliary systems (e.g., starting air unit, exhaust gas unit, etc) to each engine to avoid common-cause failures.  On-site liquid natural gas (LNG) storage is required, for example, as a result. All subsystems are categorized as being either “critical” or “non-critical” from a continuity of service perspective (Figure 2). The subsystems are fully redundant especially the critical ones.

Figure 2 – A high-level presentation of the power plant components

In our white paper, we presented a fault tolerant electrical architecture and described the topology (closed ring) used, as well as the philosophy behind the design’s protection (zoned differential protection) scheme. In order to cost-optimize the design, we stuck to the MV distribution’s “sweet spots” in terms of short circuit current ratings (<31.5kA). This constraint will have an impact on the number of engines in parallel.  At 15 kV, for example, eight engines running in parallel was found to be the most optimal.

The proposed electrical design is composed of four buildings of four floors each with a total capacity of 67 MW. The redundancy level for the engines required an availability level of 99.999% of its N+3 configuration, so we chose to connect one of the buildings to the grid as a backup using N+2 redundant engines which is a better, more cost-effective solution.

We compare the design to a typical hyperscale data center design that is connected to the grid with diesel gensets as a back-up power source. The main KPIs compared between the two solutions are:

Figure 3 – Comparison of off-grid gas power plant on the right vs. typical hyperscale solution with diesel as back-up on the left

Reliability and Availability of Power Supply

The study used a failure mode and effect analysis (FMEA) combined with a fault tree analysis for multiple contingency analysis. Table 1 summarizes the results of the study showing:

Table 1 – Results of comparing the Mean Failure frequency, MTBF, Mean Unavailability and Availability of the traditional solutions with the grid as the main supply, with the continuous gas power generation.

We can see that the gas power plant solution has an acceptable mean failure frequency (0.007= 1/58 per year) and in terms of availability, the “five nines” were reached putting it slightly above the level of a standard “N+1” solution.

Comparing the Total Cost of Ownership

A TCO analysis with prevailing tariffs and costs was also carried-out in the study. Ireland was selected as the location and for the sake of simplicity, the cost of fuel oil attributable to diesel generating sets was omitted. The 15-year TCO results for the grid-diesel solution are shown in Figure 4. Naturally, the largest cost component was the purchase of electricity – from year 4 on, it was €55.2 million annually. The total CAPEX in this case was €44 million. This analysis illustrates that the TCO for both solutions is relatively similar. The gas plant has somewhat higher initial costs, attributable to the higher expense of gas engines and its related infrastructure. But, it had a considerably lower annual operating cost. Because on-site gas generation was less expensive than buying electricity from the public grid.

Learn More about Our Research on On-Site Power Generation

The case study in the paper has shown that in terms of functionality and reliability, on-site power generation for the data center with medium-speed gas engines is comparable with that of a traditional setup based on a diesel-backed grid supply. Although the CAPEX of the gas engine power plant is higher, it is compensated with a lower OPEX, which makes the investment more profitable after the first few years. Although only the on-site power generation case was studied in this paper, there are other numerous benefits of on-site generation with modern medium-speed gas engines. Check out white paper 286: Applying Natural Gas Engine Generators to Hyperscale Data Centers to learn what those are!

Selecting a Site for a Mission Critical Data Center