The world is generally a noisy place that is sometimes soothing or relaxing, but most often unpleasant with excessive levels of noise. In urban areas, there is constant noise emanating from car engines, bus and delivery truck engines, and even noise from jet engines in the sky. In the suburbs, it’s the lawn mower, grass trimmer engines or snow blower engines (in colder climate areas). In warmer climates, especially along the coast, it’s quite common to hear the Harley Davidson motorcycle engines reverberating down the strip.

Conversely, if you’ve ever almost been run over by an electric car in a parking lot, you know it’s virtually silent. Regarding the other noise generating devices I mentioned, I recently purchased an electric lawn trimmer and I have to say that this gen 3 product with advanced Lithium Ion batteries replicates the power of an old gas trimmer and is much lighter to boot – without the super load gas engine. Electric push lawn mowers have been around for a while, but now there are riding lawn mowers powered by Lithium Ion. Believe it or not Harley Davidson has announced that an electric “hog” is in development. Also, there has been a flurry of electric airplane engine testing successes and commercial flights up to 1,000 miles will be technically possible by 2024. It seems like the world is about to be a quieter place.

Why Typical Data Center Infrastructure Noise is Above Average 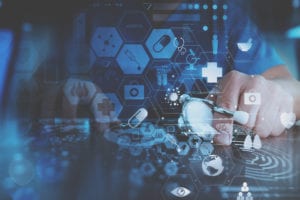 Data centers are famous for being very noisy, surprisingly noisy in fact. If you have ever visited one or often work with data center infrastructure, you are very familiar with how unpleasantly loud they can be. I recently visited one where the noise readings ranged from a low of 75 dBA to a high of 95 dBA. In comparison, normal conversation is about 60 dB, a power lawn mower is about 90 dB, and a jet engine at takeoff is 140 dB, according to the National Institute for Occupational Safety and Health (NIOSH). The federal government sets workplace standards for noise and doesn’t require action until workers are exposed to average noise levels of 85 dB or greater during an eight-hour day.

Where does the sound in data centers come from? The servers themselves generate noise coming from the high velocity fans, but the highest levels come from the HVAC equipment (air conditioners) from the fans, condensers, compressors and evaporators. Some efforts can be made to lower this noise in a reactive way by installing sound-deadening acoustic tiles on the ceiling and data center’s walls. However, data centers today (small and large), are extremely noisy environments

The Silent Data Center is Possible – Achieve it with Liquid Cooling

What if all of the server fan noise and all the noise emanating from the cooling equipment went away? The data center would be virtually silent! Is that possible? It is possible by going with liquid cooling servers. Liquid cooling servers do not have fans and make zero noise. There are two different types – emersion and direct to chip (sometimes called cold plate). Emersion technology floods the server with a liquid designed to collect and dissipate heat. This liquid circulates around the server and heat is rejected to a heat exchanger usually on the back of the server. With direct to chip, fluid (usually water) is sprayed on the plate on the back of the micro pressor in the server. Both of these are dependent on a cold-water supply from outside the building. This cold-water supply also is silent inside the data center. Plus, all of those noisy fans, condensers, compressors and evaporators go away.

There you have it, technology advancements are eliminating unpleasant sounds that you hear every day and now we can have silent data centers with liquid cooling – a world without noise. Check out my other blog on liquid cooling and why aside from the reduction of noise pollution, it is making its way back in the mainstream of the data center industry.