This is one of the most interesting times ever if you are a technologist (a.k.a. geek) or someone who benefits from the use of technology (a.k.a. almost everybody).

I am excited to discuss the underlying framework needed to deliver 5G NR in this blog, part 3 of my 5G NR blog series. The first blog, Super-fast IoT enabled 5G is right around the corner, or is it?, focused on how the industry is mobilizing to deliver 5G and the promise of 5G (sub 1ms latency). The next blog, What to Expect When You’re Expecting 5G NR Deployment: A New Network of Technologies Dependent on Micro Data, highlighted how data will need to be cached into local communities very close to the user in order to deliver sub 1ms latency.

History has shown that the world of traditional telco infrastructure was like an exclusive country club. Members talk in their own language. They don’t like to mix with the outside world. But times are changing.

IT and Telco Converge: When the Worlds Collide 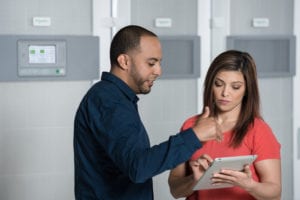 The worlds of IT and telco have been on a collision course and 5G NR may be the “coup de gras” of telco independence. In the IT world, cloud computing used to be a mystery. But now, I think, most people at least know about these giant, air-conditioned buildings packed with computers that store all of their pictures. Yes, even the pictures of the dinner they are about to eat and feel compelled to snap a picture of and share with their social network.

Those of us in the IT world understand the complex network of data centers that store these dinner photos while they also run our business applications in the cloud – like Google Docs or Salesforce. A simple way to think of this cloud computing for IT is an architecture of centralized cloud, regional edge, and local edge data centers. The closer the user is to the data center, generally the lower the latency.

5G NR is not only going to be the wireless front end of a converged network and data center architecture, the goal is to make the radio access network (RAN) of 5G NR more open and flexible, while supporting existing functions. Plus, have it massively scale to support the new functions and applications. The architecture will need to adapt from the current 4G base stations and Metro clouds to a 5G NR distributed cloud technology of macro core clouds, metro edge core clouds, and micro edge core clouds. All three versions of these core clouds will have network function orchestration and data cache – so telco and IT functions. Implementing a distributed core cloud technology will take network function virtualization (NFV) to make it possible for operators to optimize, manage, and maintain networks. NFV refers to the replacement of network functions on dedicated appliances, such as routers, load balancers, and firewalls, with virtualized instances running as software on commodity hardware in small cells (very close to the user). NFV is a key enabler of the coming 5G NR infrastructure, helping to virtualize all the various appliances in the network. In 5G, NFV will enable something new called network slicing. This will allow multiple virtual networks to be created on shared physical infrastructure and actually give priority to more critical applications.

NFV is a key enabler of this new 5G NR distributed cloud, where compute, communication, and content delivery is handled by multiple data centers but appearing as a single source to the user in a world of accelerated data generation and high bandwidth content transmission. In 5G NR, NFV will be about more than merely moving functions to commodity hardware close to the user, it will be about enabling a distributed cloud computing environment that will be scalable, resilient, and fault-tolerant. This distributed cloud architecture will be virtualized in a new way called cloud based radio access networks (cRAN). cRAN moves processing from base stations at cell sites to a group of virtualized servers running in an edge data center. cRAN enables service providers to dynamically scale capacity and more easily deploy value-added mobile services at the network edge to improve the user experience.

But, where is the edge?

Many people are talking about a massive deployment of micro edge core clouds extremely close to the user as the initial step for 5G NR networks. While this would make sense technically and philosophically to deliver the sub 1ms latency promised, there is a very large technical hurdle involved in network traffic coordination and orchestration with NFV and cRAN. We will see hundreds of thousands of micro edge core clouds, but not right away. The first step of 5G NR will be adding cRAN data centers to LTE housed in metro edge core clouds (or regional data centers). In conjunction with this, we will see 5G NR MIMO (multiple in, multiple out) and millimeter wave antennas. This initial “rollout” will enable the use of these new “5G” phones, which are essentially very limited, 5G NR hot spot phones. These will deliver incremental improvements in network performance but only in select community areas configured with the metro edge core cloud, MIMO, and millimeter wave antennas.

Up Next. Building the Physical Infrastructure for 5G.

From a data center perspective, I believe significant buildouts will occur worldwide in metro core clouds in 2019 – 2020. While these will deliver performance improvements, it will not be sub 1ms latency because of their physical location. We will see sub 1ms latency when the massive metro edge core cloud rollout happens, most likely in 2021 and beyond. Be sure to refer back to my original blog that set the stage for this conversation around the industry mobilizing to deliver 5G.

Coming to a Data Center Near You – Distributed, Hybrid, Tethered Edge Cloud

Is My Data Center Consolidation Really a Private Cloud?