Last year, we put out a theory on edge computing and published a white paper addressing the growth of cloud computing and the need to rethink the level of redundancy required for the physical infrastructure equipment remaining on-premise, or at the edge.

Now we want to challenge the theory and find out if it’s true.

Although we could attempt this challenge in many ways, we kept coming back to the retail industry where Schneider Electric has been doing a lot of work. To us, it’s a fascinating case study because all the retailers seem to be doing the same thing: trying to figure out how to survive against Amazon in a time of record store closings and vast changes in shopping behavior.

With so many retail chains closing their doors, it’s life or death for these companies and they all seem to believe one basic thing: technology may be their way home. If they apply new technology, they should be able to give their customers a unique, in-store experience that Amazon cannot replicate online. They are fighting back with – pick your favorite buzzword – IoT, Augmented Reality, and Artificial Intelligence. They’re all being used and retailers are scrambling to figure out how to do it.

So, clearly businesses are struggling to figure out how to survive while facing seismic shifts in consumer buying – this convinced us to address what’s happening here.

This is not Star Trek Type stuff 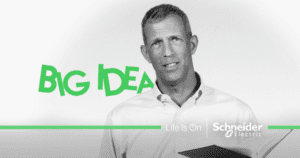 This new digital, in-store focus for retail brings up lots of questions. First, is retail really deploying new technology? If so, is it having an impact or changing something on the IT systems? Are we seeing changes to the infrastructure as a result and is it changing the requirements for availability of their local edge?

Here’s an easier question: when’s the last time you went shopping? You may have noticed the re-imagined brick and mortar space is becoming a pretty interesting place. Technology that is already being rolled out includes a magic mirror where you can try on clothes and makeup by simply standing in front of it. At McDonald’s, you can place your order at a stand-alone kiosk. At Amazon Go stores, there’s nobody to check you out. Think about the technology involved in walking out of a store without checking out!

I’m talking about technology that’s already happening in stores. There’s a lot more in the works: mannequins that assess your facial expressions and your emotional reaction to an outfit with Artificial Intelligence; facial recognition of VIPs so if you walk into a store, personnel are alerted and you are greeted by name and shown items you may want to buy based on your purchasing history. Think about the difference in your in-store experience if someone says, “Here are three pairs of shoes we think you might be interested in.”

This is not Star Trek type stuff. This is all in the realm of reality and any interruption in this new technology is likely to have a major business impact.

How Our Resiliency at the Edge Theory is Proving True

We want to know what all these changes will mean for IT in the retail space and what the infrastructure will need to look like. It’s clear the reliance will continue to drive IT and we’re moving to a lot of dual network connectivity using cell phone wireless as the backup. Maybe that becomes primary in the future but either way the network redundancy is becoming critical. We might not see generators on site but we might see putting in two hours of run time using li-ion batteries. The infrastructure doesn’t necessarily have to be the same as what we had in the data center. It’s going to look different and we must start comprehending the amount of insurance policy a retailer should buy to maintain the in-store experience they’ve worked so hard to deliver.

We’ve helped several major retailers provide more efficient deployment of new technology for edge data centers connected to the cloud. We learned many things, including that it’s not necessarily the amount of power that makes something mission critical. If a network closet or server room or micro data center in the back of your store is the connection point between your customer and their experience, it becomes mission critical regardless of the power consumption.

As our white paper on edge computing states, “Use of cloud computing by enterprise companies is growing rapidly. A greater dependence on cloud-based applications means businesses must rethink the level of redundancy of the physical infrastructure equipment (power, cooling, networking) remaining on-premise, at the edge.”

Using retail as a case study, lots of signs point to our theory proving to be true.

Learn More About the Importance of Resiliency at the Edge

Watch this video of the Schneider Electric Meet The Expert series to learn why server rooms and edge closets dominate system availability and why, if not managed properly, these mission critical micro data centers could be your weakest link.