If you’ve been enjoying all the big soccer games (or football, depending on where you’re located) on television, you’ve likely got engineers at Akamai Technologies to thank, not to mention plenty of data centers around the globe.

This revelation came to me when reading a recent Boston Globe story about how Akamai is keeping tabs on all the action from its Broadcast Operations Control Center in Cambridge, Mass.

Human beings on the front lines at Akamai 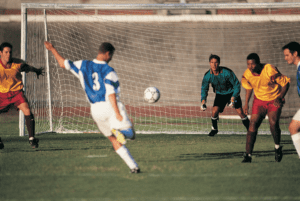 Akamai is in the content delivery business, ensuring that its customers get reliable, speedy service from their Internet connections. It does this with a series of servers and caching devices located at data centers around the globe, which enable it to serve up content locally to users – thereby dramatically reducing latency and response times.

I’m sure Akamai has plenty of good management technology in place to help it ensure reliable network performance. In addition, as the Globe story details, for the world soccer tournament it also uses human beings watching on various sorts of screens – computer monitors, tablets and the like – so they can see if anything isn’t as it should be.

The whole setup struck me as a prime example of how we all should be thinking about data center operations and management in the Internet of Things era. (Yes, I made the leap from the tournament to IoT and data center management. I’m just that good…or I really need a vacation.)

In a typical IoT application, you have various “things” – sensors or devices of some sort – sending data to a centralized data center, often in the cloud. Rather than send data directly, it’s often advantageous to use a series of edge data centers in order to ensure proper performance and perhaps perform some massaging of the data before it goes to the cloud (a topic we’ve covered previously). To me, that’s quite similar to how Akamai has a series of data centers around the globe performing the caching function.

Akamai’s use of human beings to augment its monitoring technology also struck a chord with me because it’s quite similar to how Schneider Electric’s own data center operations and management services work.

EcoStruxure IT: an IoT app for data center management

Our EcoStruxure IT service is essentially an IoT application. It collects information from various data center infrastructure components located at hundreds of customer data centers around the globe. The data is collected in a cloud-based data lake. From there, we apply intelligent algorithms to glean useful insights from the data. It helps inform predictive maintenance programs, for example, and lets us know when a given piece of infrastructure – perhaps a UPS or cooling unit – is performing outside of its norm.

That is all valuable information to any data center owner or operator, as it helps ensure the facility is running at peak performance and reliability. But the data alone isn’t enough. Just as Akamai has human beings actually watching the games to ensure the broadcast quality is as it should be, it takes actual data center engineers to act on the intelligence that EcoStruxure IT provides.

For example, EcoStruxure IT will often help troubleshoot a problem by presenting various options for what the root cause of the problem might be. From there, it takes an experienced data center engineer on site to assess the information and immediately take the best course of action. And on a more basic level, even though EcoStruxure IT may alert you that a UPS battery is failing, the battery isn’t going to replace itself.

Companies like Schneider Electric are getting better at adding intelligence to the way we operate data centers, helping to make them more efficient and reliable. However, that intelligence doesn’t eliminate the need for experienced data center engineers on site 24×7. Our Critical Facility Operations solution provides those valuable personnel, along with the tools, technologies, program, and processes to operate the data center at peak performance.

You can learn more about EcoStruxure IT here. Now pardon me, I’ve got to run. There’s a big game I need to go watch. Thanks, Akamai!