There was a time when data center owners and operators wanted water, or any liquid, as far away from their IT equipment as possible. This is an interesting change in perspective from the days when large mainframe computers were cooled directly with water, pumped into cold plates buried within these very expensive machines. Over time, the dominant popularity of smaller air-cooled servers created a whole generation of hydrophobic data center managers. That attitude started to change as heat densities continued to make steady upward progress and it became harder and harder for air cooling alone to efficiently handle the heavy heat loads of racks that were being deployed. 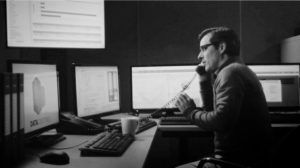 At one point, 10kW per cabinet was considered very high density (and still is today to some users). Today, we hear of densities that are 5x that or more. Therefore, in the past several years there has been a renaissance of water, first close coupled cooling units adjacent to the racks of servers became popular as a way of addressing high density efficiently and predictably. And now, there’s an increased interest in liquid cooling solutions where the IT gear has liquid cooled heat sinks (again), or is immersed completely in a cooling bath of fluid. Things are going even further with this idea of floating an entire data center in water. A future on the high seas indeed!

There is an 8MW colocation facility being built on barges that will float in San Francisco bay. The only way it could be surrounded with more water, is if the data center was actually underwater (another concept that is being considered). I recall projects like this in the past and they always seemed to go nowhere, but finally this is a concept whose time has come. Water is a far more efficient heat transfer medium than air, and therefore the ocean provides a vast resource for heat rejection. Some might argue that it also insulates the data center from seismic events that land-based data centers could be subject to, and reduce costs because expensive chiller plants are no longer needed. However, what about storms, or tsunamis that could possibly happen? Even if this and many other engineering challenges are dealt with, there’s still the perception issue – is this something that customers will truly feel at ease with?

I think it’s safe to say that water near-to and directly cooling IT equipment is here to stay, and most customers are comfortable with that. But, the entire data center floating in the ocean seems to be a whole new challenge.

Let Your Opinion Be Heard

Would you be comfortable if your entire data center (or your colocation provider) was floating in an ocean or large lake? Let me know your concerns and how you would approach this. Comment below!