It’s hard to overstate the contributions Animal Logic makes to the films it has produced. Happy Feet was entirely computer-generated, including six scenes that had more than 400,000 penguins – produced by some 2,000 blade servers, as detailed in this Network World story. To get a sense of the magic Animal Logic creates, check out this video posted by the visual effects supervisor for The Great Gatsby. It shows how Animal Logic took simple real-life shots and superimposed them on computer-generated visual effects, or VFX as they’re known in the business, with stunning results. 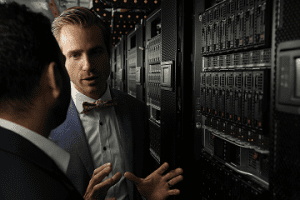 Alex Timbs, Head of IT at Animal Logic

Creating these effects takes ever-increasing amounts of computer power, and because the business tends to be cyclical the company often needs it fast. To ramp up for one recent movie it was working on, Animal Logic had to build a data center in a mere 4 1/2 months. It found only one company could deliver in such a compressed timeframe: Schneider Electric, with a prefabricated data center to support high density applications.

“Speed of deployment for our data center environments is absolutely critical to our business,” says Alex Timbs, Head of IT at Animal Logic, in a video in which he discusses the data center. “We were looking for an extremely high capacity, highly dense solution. And we selected the Schneider Electric solutions based on their engineering capabilities and ability to meet the business needs within the timeframes allotted.”

Prefabricated modular data centers are far quicker to deploy than traditional “stick-built” data centers because most of the installation and integration work is done in a controlled factory environment, to customer specifications. Complete, finished modules for power, cooling and IT space are then delivered to the site, where it’s a relatively simple matter to hook up power, make other final connections and get them up and running. Data center infrastructure management (DCIM) software is likewise pre-installed and integrated, to provide visibility across the data center and to improve planning and operational performance.

The modules can take many different shapes and sizes, from skid-based components that sit inside an existing building to, as in Animal Logic’s case, self-contained data centers housed in ISO containers.

Schneider Electric is also providing ongoing service and support for maintaining the data center, including StruxureOn, its cloud-based monitoring service that provides 24×7 remote monitoring and troubleshooting – even from a smart phone.

“Schneider Electric was the only vendor to be able to deliver in that 4 1/2 months and has very rapidly become what we like to call ‘a partner in making movies’,” Timbs said in the video.

It wouldn’t be at all surprising to see Animal Logic one day accepting an Oscar® for Best Visual Effects, adding to the array of awards the company has already earned. Should it happen, remember that behind the scenes is a high-powered data center making it all possible.

To get a complete grasp on the costs and tradeoffs between stick-built and prefabricated modular data centers, including a detailed cost analysis, check out the free Schneider Electric white paper no. 218, “Quantitative Analysis of a Prefabricated vs. Traditional Data Center.”

What is Schneider Electric’s Strategy for Prefabricated Data Center Modules?