Most data center managers are tasked with striking a balance between maintaining high levels of uptime and controlling both CAPEX and OPEX.  When confronted with the dilemma of aging UPS infrastructure (a key component for keeping data centers up and running) data centers managers have a choice of either pursuing a “run to fail” approach, upgrading the existing system, or buying new UPS infrastructure.

Making the right decision will depend on a number of unique factors. These factors include the criticality of the data center, future load requirements, whether or not executives are planning to outsource some of the data center operations, and whether cost savings surrounding energy efficiency are a factor.

Let’s look at the three decision scenarios to determine under which circumstances each decision makes the most sense: 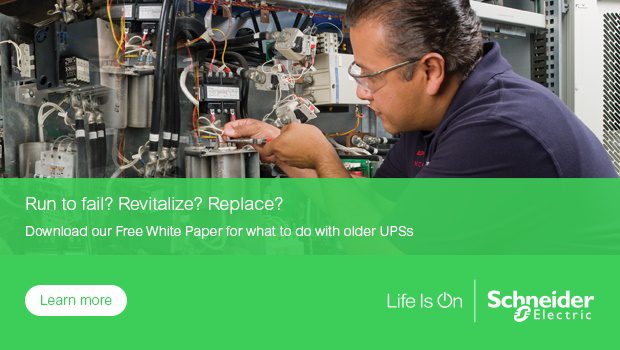 Although risk of downtime is increased under such a scenario (especially if the overall degree of redundancy in the data center is weak), “run to fail” serves as an appropriate option when no budget exists for either an upgrade or purchase of new equipment. In that case, what funds are available should be spent investing in a service contract that will handle sudden failures. If the facility will soon be consolidated or if a short term move to the cloud is anticipated, the “run to fail” scenario may also present a sensible option.

Upgrades are less time consuming than a “buy new” scenario. An upgrade also presents less of a risk to the load. Upgrade tasks can be performed in a few hours with the UPS in maintenance bypass while the critical load is powered by the utility or a redundant power source.

When dealing with an aging UPS, there is no one right answer. Understanding the current situation and future requirements will largely determine whether it makes more sense to “run to fail”, upgrade, or buy new. For more details on managing aging data center UPS systems, download the Schneider Electric White Paper 214, “Guidance on What to do with an Older UPS”.