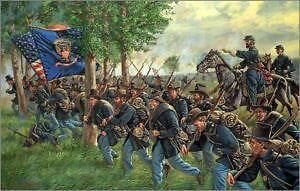 It is hard to imagine anything more “mission critical” than achieving your objectives, conserving your resources, and protecting the lives of the men and women under your command than when in combat.  The mission is made dramatically more complicated and difficult by the deafening noise, blinding smoke, gut-wrenching smells, and debilitating fear that clouds perception and judgement.  Some succeed in these circumstances, and many do not.   As a student of military history, I’ve always been awed by those that do succeed; amazed at their seemingly superhuman ability to not just survive, but to actually thrive under fire (literally) and ultimately win the day when so much was against them.

When I began conducting research and interviews for our White Paper 196, “Essential Elements of Data Center Facility Operations”, I was struck by the parallels between successfully operating a mission critical facility like a data center and successful military command in the field.  My intuition was confirmed as I learned that many of our critical facility managers who manage our customer’s data centers were ex-military veterans with either combat experience or service aboard nuclear submarines; environments with little room for error.  A key takeaway for me was the importance of the manager and operations team having a “mission-critical mentality”; a code of conduct, if you will, that is a pre-requisite for successful operations.  The best design in the world with the latest technologies can be quickly and easily undermined by poor operations management.  Thinking and acting from this mindset is the foundation for operating successfully under pressure in an environment filled with threats and frequent change.

Principles of the Mission-Critical Mindset in the context of combat command:

A line officer in combat will closely monitor all threats and risks.  They will constantly scan for weakness in their own battle lines and those of the enemy’s.  Soldiers will be moved to weak points and positioned on the flanks to protect against enemy attempts to either break through or encircle their position.  Fire is directed and controlled as much as possible to ensure an efficient use of ammunition and supplies.  In camp and while on the move, flankers or pickets are positioned out ahead to provide advanced notification of an impending attack to buy time for the main body to respond appropriately.  Reserves are kept in the rear for redundancy poised to respond immediately if the front line fails and has to fall back.  Equipment and weapons are regularly inspected, cleaned, repaired, or replaced to ensure max battle readiness at all times.  Virtually every activity of a fighting unit in the field is aimed at mitigating risk to the mission as well as to the soldiers and resources allocated to carry it out.

Constant training, drilling, and planning is essential for automating the right actions and responses of soldiers in stressful combat.  Loading and operating weapons, using communications gear, providing first aid, issuing commands, etc is much better done if those operations are second nature and can be done sub-consciously.  This preparation and demonstration of the knowledge learned builds confidence. Being confident in your abilities helps you keep your cool instead of panicking or hesitating in the face of an immediate challenge.

Militaries around the world, of course, rely on thorough and frequent training and drilling as a means to ensure continuous combat readiness.  But effective units are also constantly analyzing performance, technologies, and the status and position of their adversaries to determine what can be done to improve readiness and further reduce risk of mission failure.  This analytical approach occurs at all levels of the U.S. military from the Pentagon down to the individual fighting units on the ground in theater.  This process-driven approach helps ensure risks and opportunities don’t slip through the cracks unnoticed until it’s too late.  It helps evolve the military as technologies and tactics change.

Understanding the different forces under your command, their roles and dependencies on particular types of resources and tools, is a critical aspect of fighting effectively.  In the American Civil War, for example, a commander would need to arrange their artillery, infantry, and cavalry in the right positions and assigned the right tasks given their individual weapons capabilities, mobility, distance to the enemy, current levels of morale/health, topographical features, and so on.  Great care would have to be given to ensuring sufficient supply lines to the battle front without exposing supply depots to enemy fire.  Food, clean water, ammunition, medical supplies, blacksmithing equipment, etc. would all have to be carefully managed and supplied under tremendous stress and pressure.  Supplies would have to be guarded and flanks picketed. Understanding the unique capabilities and resource dependencies is important for not only ensuring they are deployed properly, but also to help identify and respond quickly as problems develop and resources get out of balance or are lacking.

Typically, in wartime, most of a soldier’s existence involves long periods of boredom and tedium punctuated by the occasional moments of sheer terror.  Effective combat leaders use the time between battles as a time to drill and train; to re-inforce and maintain what has been learned before.   Combat commanders will review performance in battle and write detailed after-action reports to try to make sense of what happened and try to learn from it.

I don’t think it’s crazy to think of high pressure, no-room-for-error facilities like a data center to having parallels to battlefields.  Managing and operating a mission critical facility is very different from managing a commercial office building or a factory.  For most data centers, failure is not an option.  Some liken it to “maintaining an airplane while flying it”.  Today, businesses are often either wholly dependent on their data center or the data center IS the business.  Complexity is much higher and the pace of change within the data center is much greater than in most other types of facilities.  Increasingly software defined data centers (i.e. virtual machines, virtual storage, and virtual networks) and workload movement combined with short IT refresh cycles make for a challenging management environment.  These challenges require careful coordination and planning with the Facilities team.  The potential impact on system availability can be so severe that each operational task must be carefully evaluated in terms of its net effect on availability.  There are also unique outside pressures.  Government regulations and customer audits require detailed processes and procedures that are properly documented and conscientiously observed.  The high criticality and cost of data center operations often invokes an intense focus from the CxO level of the organization.

Effectively managing and operating in this type of environment dictates that facility management teams adapt a “mission critical mentality” that focuses on risk mitigation and grasps the interconnectedness of facility and IT systems.  This operating philosophy forms the foundation of an effective operations & maintenance program.