The data center industry is poised for significant change in the refrigerants which are used in cooling systems, changes that you’d do well to pay attention to in order to understand the implications for your own data center.

We’ve known for years, even decades, that refrigerants used in all sorts of cooling systems – from cars to home window units and refrigerators – are harmful to the earth’s ozone layer and impact on the global warming. So we’ve been phasing out the harmful ones over time while constantly looking for effective, safe replacements – typically with no shortage of prodding from various governmental bodies. 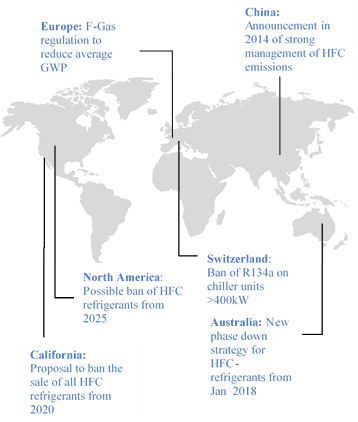 First waves, around 2002 in Europe and more recently in North America and Asia, were to ban any blend which contributes to the ozone depletion, while recent and next standards are going to reduce the impact on the general increase of temperature generated by refrigerant leakages in the atmosphere. More recently, an accord to cut the worldwide use of a powerful planet-warming chemical used in air-conditioners was signed recently.

Data centers are no exception to this regulatory trend and, while the issues are quite clear, the solutions are far less so.

The two main refrigerants used in data center cooling systems today are R410A, used in small to medium-sized data centers that require about up to 300-400kW of cooling capacity per unit, and R134a, used in larger systems. The problem with both of them is they have a relatively high rating in terms of global warming potential (GWP), a measurement of environmental impact[1]. While there are potential replacements for both of them that have lower GWPs, they are not without issues of their own.

The most environmentally sound option would be to use “natural” refrigerants, meaning substances that occur naturally as opposed to man-made chemical compounds. The most common options are ammonia, propane and CO2, each of which have low GWP ratings (in fact, CO2 is the baseline by which GWP is measured).

But they each also have issues. Propane and ammonia are highly flammable and ammonia is also toxic, while CO2 is simply not very efficient for cooling applications and requires a pretty complicated, and expensive, technology. As a result, only a niche market exists for each option.

Which brings us to the man-made refrigerants. Some of them are emerging as potential replacements for R410A, L-41, R32, DR55 and DR5.

All of these are still under development and are, again, not without issues. Chief among them is they are all flammable, although “slightly”, while current solutions are NOT flammable. Now that’s not necessarily a deal-breaker – after all, most of us have flammable substances such as oil or gas that we use in our homes every day. But clearly it’s preferred that the refrigerant coursing through your data center not be so flammable that it presents a fire hazard. And any substance that is flammable would likely face a hard time getting a seal of approval from various standards bodies. Units and components are still under test and, although some of those are available, as a result, it may be some time before we see a suitable replacement for R410A on data center applications.

The news is brighter on the replacement for R134a. Here we’ve got three main refrigerants coming to the fore: R1234yf, R1234ze and some blends of R1234ze and R134a (one of those is defined XP10). Of those, R1234yf is going to be used massively in the automotive industry and is consequently expensive and not widely available, while any blends between R1234yf and R134a are featured by a not a really low GWP. Overall, R1234ze seems to have the most support. It is only slightly flammable and fairly efficient, although not quite as strong in terms of cooling capacity as R134a. Given that, it works out to be about 30% more expensive than R134a. Still, of the three, R1234ze is fairly far along in terms of development and appears to offer the best tradeoff in terms of price, performance, flammability and GWP.

Moving to a new component, such as one as critical as refrigerant, is certainly a challenge, however the good news is that it is possible to leverage R1234ze specific features in order to not just greenwash cooling, but also get the opportunity to improve machineries. 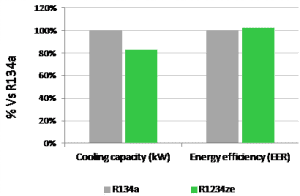 A first example is certainly on the efficiency, which may be improved as shown in the diagram here.

Another important opportunity which is “offered” by this new refrigerant is the application in warm areas of high water temperatures, already introduced in our previous blog. 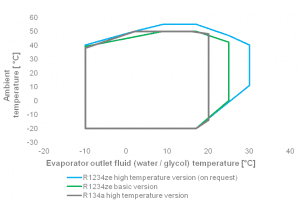 A current limitation of high water temperature application is the max ambient conditions allowed by R410A or R134a when chillers are providing 18, 20°C chilled water. As shown in the diagram here, 45°C or higher ambient temperatures do not allow high water temperatures, while R1234ze allows for the latest trend in datacenter design temperatures even in those countries where it was not possible in the past.

If we are to meet the challenge of dealing with climate change, and hit the targets set out in international Paris summit late last year, it’s going to take contributions from all quarters. So expect to see changes in how we cool our data centers coming down the pike. We recently addressed how government regulation is driving changes in data center cooling design, moving away from DX and more to chilled water and air economizer systems. It’s clear that some changes will come sooner than others, but that change is coming. Want to figure out how your data center is doing on the environmental front?  Evaluate your data center’s carbon footprint with our free white paper, Estimating a Data Center’s Electrical Carbon Footprint.

[1]GWP (Global Warming Potential) is an index based on CO2 equivalent tons to measure the impact of a greenhouse gas on the atmosphere. HFC refrigerants commonly used on chillers have GWP values between 1000 and 4000.  New alternative refrigerants dramatically decrease such values

Water vs. Refrigerants in Data Center Economizer Cooling Systems: Why Water is Winning