Home Data Centers Did you choose the right ceiling-ducted air containment for your data center? 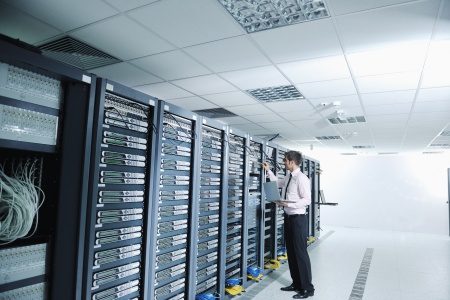 My colleagues Jim VanGilder, Simon Zhang, and I recently wrote a white paper which describes three typical approaches to deploying ceiling-ducted air containment: passive individually-ducted rack (ducting only), active individually-ducted rack (include fans) and ducted hot aisle containment system (ducted HACS).  All three air containment methods can improve the reliability and energy efficiency of a data center. But which one is the best one for your data center?  This paper studies the cooling performance of these air containment methods and the primary considerations for each in order to make a selection.

Parameters like the amount of excess cooling airflow, leakiness of the drop ceiling system, ceiling plenum depth, rack density and the physical layout of equipment will impact the cooling performance of the ducted air containment. We used Schneider Electric’s EcoStream CFD software to study the airflow pattern and pressure in the ceiling plenum for passive ducted systems, and came to the following conclusions:

Active ducted systems are able to overcome adverse plenum pressures, but possibly at the expense of other areas of the data center.

With an understanding of the airflow physics of ducted air containment, we recommend the following guidance for implementation:

However, how can adequate ceiling plenum vacuum pressure and minimum leakage paths in containment systems be insured? We also provided a series of best practices to achieve these targets in this paper.

If you want to dive deep on the cooling performance and the implementation best practices, you can read our white paper 182, The Use of Ceiling–Ducted Air Containment in Data Centers.