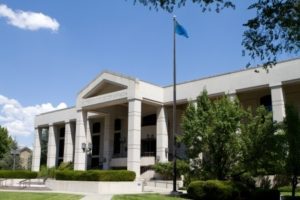 When I think about the Supreme Court, I conjure an image of nine judges sitting on a bench, asking lots of questions (except for Clarence Thomas) to get to the bottom of whatever matter happens to be in front of them. In my image, there’s not a computer or iPad in sight.

Behind the scenes, however, is a fair amount of computing power, at least if the Nevada Supreme Court is any indicator. It has about 150 users and about 200 computers between its two locations in Carson City and another in Las Vegas, says Fred Aker, network specialist with the court. Its data center has about 10 racks and a secondary location houses another smaller rack.

The kind of demanding climate that much of Nevada sees also comes with some power issues, Aker says. “In Carson City, especially, our power grid is not perfect. We have numerous power outages, quick ones, if there’s any kind of electrical storm,” Akers says. “Quite often I see the lights flicker and I’ll run into the server room and everything is working fine because it’s all backed up. All the desktops stay up, everybody’s running.”

That’s a tribute to the APC by Schneider Electric UPS systems the Nevada Supreme Court uses, he says. In the data center the court has the Symmetra PX 70 “filled up with batteries,” to provide 53 minutes of backup power.

“We can make it in from home if something happens and the generator doesn’t start,” Aker says. “We feel we’re covered by the APC equipment. We’ve never had an issue where it has not worked.”

To back up most desktop machines the court uses SmartUPS 500s along with the SmartUPS 750 for power user machines.

Asked why he’s so sold on APC by Schneider Electric UPS equipment, Aker has a ready answer.

Check out the video for my full interview with Aker, recorded in the Schneider Electric booth at the recent Interop 2014 event in Las Vegas.