Thriving, growing economies usually arise from a mix of good fortune and foresight. Some regions thrive because of rich natural resources, while others have made the most of a being located on a trade route. 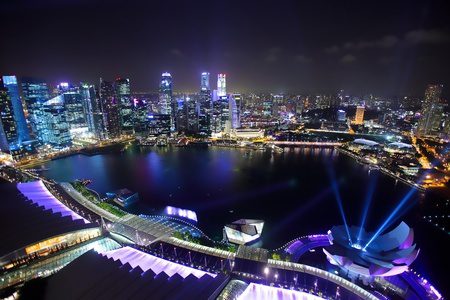 Singapore doesn’t have rich natural resources, but it is at a crossroads of sorts—an intersection of maritime trade routes in Southeast Asia. Over many decades, Singapore has invested in better harbor facilities to make that most of its geographical location. That’s a case of having foresight, and the will to act on it.

Now the Singapore government is in the midst of another exercise in foresight—it has prepared a plan to transform Singapore into a “Smart Nation” where sectors such as infocomm and media—dubbed “ICM” for short—can thrive by through hyper-connectivity and better use of big data gleaned in part from the Internet of Things (IoT). The plan, which can be read about here, is said to include investment in better IoT infrastructure such as “above ground (A-G)” boxes so that real time data on conditions such as traffic patterns can be communicated and analyzed to derive benefits for the public.

It’s not as if Singapore is trying to evolve from nowhere in terms of digital connectivity. It already has a high rate of broadband connectivity, and is rated highly for e-government, but now with the Smart Nation initiative, Singapore is planning to kick its connectivity and big data foundation up a notch. It’s another case of having the foresight to realize that continue to thrive, Singapore needs to invest in digital infrastructure. Today, rather than docks, the “infrastructure” needs revolve around hyper-connectivity, open sharing of content and Big Data, and IoT infrastructure.

At the “app” or application layer, there are a raft of benefits envisioned under Smart Nation, from apps that make use of data on energy use or traffic patterns, to a flourishing generation of intellectual property, and better access to health care services.

While it’s still unknown how many of the envisioned uses shall come to pass under Smart Nation, we know from history that whenever big leaps in technology come to pass (e.g., the Internet; mobile broadband; devices such as iPhones), innovations quickly follow at the app layer. This will put new, massive demands on data centers.

In fact, under the Smart Nation plan’s “Digital Harbour” concept, a sustainable, flexible supply of data center capacity is seen as one of the harbour’s three enabling pillars. In a recent forum presentation in Singapore, I noted these coming demands, and pointed to the response that is needed.

Now more than ever, data centers need to change. They need to become more agile, flexible, scalable, and energy efficient, and not just new data centers coming on line, but also existing capacity that can be upgraded and improved.

To respond to Smart Nation or similarly ambitious initiatives elsewhere, companies that operate data centers also must show some foresight. A good starting point is to assess needs and think about how to upgrade and improve present capacity. At Schneider Electric, we see this type of assessment as working best within a lifecycle approach to data center services. It does take planning, monitoring, and reassessment to keep the lifecycle approach on track, but so does any good methodology for continuous improvement. More about this approach can be found in this blog post

Big data generation is going to accelerate, especially in places like Singapore where there will be open sharing of data from IoT sources. However, the IoT is a worldwide trend that is expected to reach 26 billion connected units by 2020, and will generate explosive data growth everywhere, which will bring with it massive data center demands.

Data center operators are going to have to be predictive, nimble, and flexible in the way that they manage power protection and cooling to stay efficient as IT loads swing up and down due to the crunching of big data. Schneider Electric believes one of the best ways to do this is to use predictive analytics on the data being generated in data centers to fine tune operations. Think of it as data science for data centers, which you may read in more depth in this recent blog post.

Certainly, the idea being able to flex the data center physical infrastructure (DCPI) layer quickly enough to handle the type of demands that will happen under Smart Nation is daunting, which is why new methods like data science area needed. It’s somewhat like the old saying of needing a “hair of the dog that bit you” in that big data will place massive new demands on data centers, but by analyzing the big data being generated in the data center, they can be made flexible enough to handle the demands. Knowing this application of data science will be hard to pull off for most operators, Schneider Electric can perform this application of data science as a service.

To sum up, data centers need to be ready for Smart Nation. The lifecycle approach to data center management and improvement, and the application of data science will increase the flexibility and efficiency of the DCPI layer. It takes some foresight and preparation, but will pay off when the new demands fostered by Smart Nation investments really start to impact data centers in Singapore and Asia.

Note: Thanks for to my Schneider Electric colleagues Brian Parkinson and Joycelyn Longue for helping to form and review the content for this post.

Data science as remedy to demands on today’s data centers