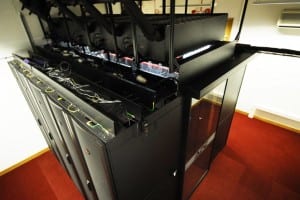 All data center design managers bring their own set of challenges. Sometimes the scale of the challenge is not reflected in the size of the facility; a small datacenter design and build project might demand a considerable amount of ingenuity in order to squeeze as much capacity into its constrained footprint. Or it might be required to meet a series of objectives each of which appear to conflict with one another.

I visited just such a site the other day in order to write a case study; I won’t mention the name as this blog post will be followed up with a more in-depth article once those running the facility have signed it off. However, it stands as a case in point as to how standardized data center components provide the flexibility to be adapted for applications which in the past might possibly have required enough  custom engineering as to render the project financially unfeasible.

In this case, the customer needed to build a new facility to increase the space for IT equipment by 50% to accommodate growth in demand from customers in healthcare. The datacenter is business critical as it serves patient records as well as other connectivity services to doctors’ surgeries in a large and densely populated conurbation. The challenges facing the data center designers included:

The case for the use of modular, scalable infrastructure was easily made as this answered the need for portability. However, the question of increasing the number of equipment racks took more thought.

Containment of the hot aisle was thought to be the most workable design proposal. Increasing the power density in the racks not only offered the potential to remove peripheral CRAC (Computer Room Air Conditioning) units, but also to eliminate the need for a raised floor and enable the use of other space saving hardware (e.g., blade servers). However, the proposal was rejected as the design required cooling units to be placed alongside the IT load, taking up valuable equipment space.

The problem was solved by using an innovative addition to Schneider Electric’s InfraStruxure cooling range; InRow OA – overhead, or over-aisle cooling units. By suspending the units over the contained hot aisle, the customer was able to meet the requirements for the number and density of equipment racks, with no need for a raised floor and zero floor space taken up by cooling units. It’s the first application of its type in Europe and thanks to it (and advances in technology) the new data center not only twice the number of racks as the old, it also provides 10x the processing power.