Advances in technology and the explosion of connected devices and sensors are driving a new era of buildings and their management. With that, facility managers are now under pressure to deal with an unprecedented number of systems and the ensuing complexity they bring.

How did we get from wooden walkups to steel towers? From the first power grid to green power? Darkness to smart lighting? Typewriters to desktops to billions of connected things? In this series of three posts, we will take a look at the evolution of buildings and the growth of connected devices that enable facilities to run at maximum efficiency. 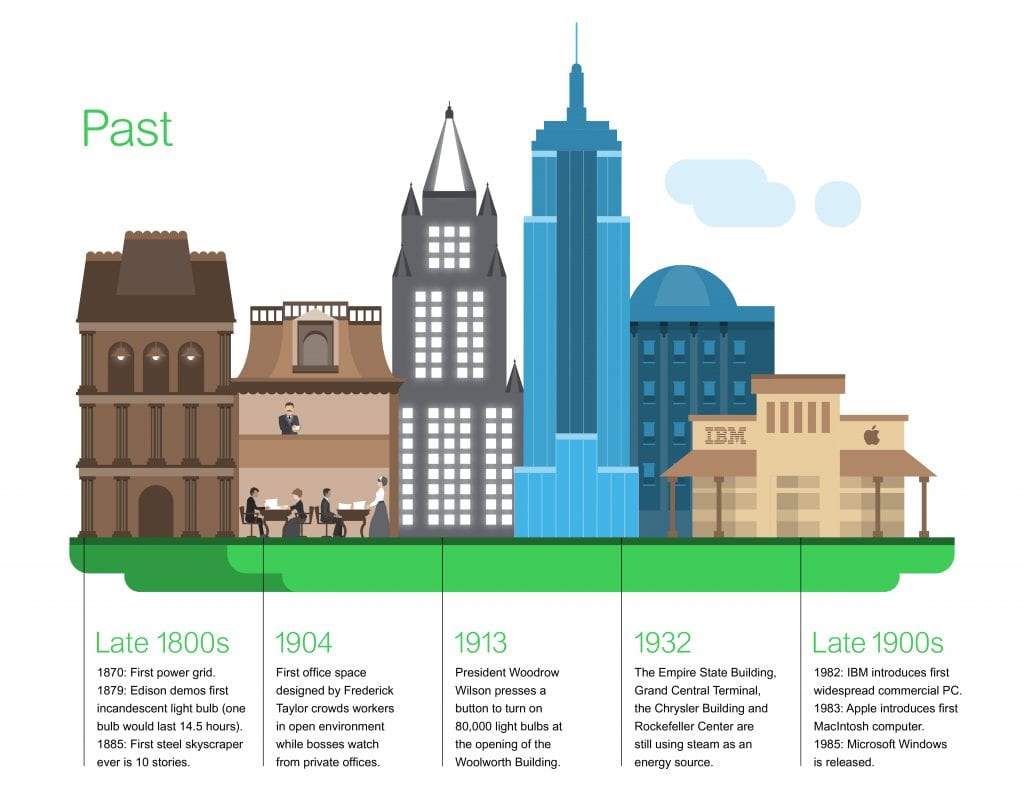 In this post, we’ll examine the technologies that powered buildings in the late 19th and early 20th centuries. A key turning point was the birth of indoor electric lighting and the first power grid, which was created in 1870. Not long after, Thomas Edison demonstrated his latest invention – the incandescent light bulb – which lasted a total of 14.5 hours and made the electric lamp a coveted item.

Throughout the 1880s, electric lighting was an extravagance only for the rich, found in luxury hotels and mansions of people like J.P. Morgan and George Westinghouse. During this time, DC Power Systems powered factories and small downtown areas but did not reach 95 percent of residents. “Small” power systems were sold mostly to factories and generally used only for industrial or mining purposes. The Edison Illuminating Company created New York’s first power plant in 1882, lighting up to 400 bulbs and serving electricity to 85 customers.

The 1880s also saw the rise of the first skyscraper. William Le Baron Jenney’s Home Insurance Building debuted in Chicago in 1885 and consisted of 10 stories of steel. It was said to be inspired by the Great Chicago Fire of 1871, which burned more than three square miles of mostly wooden structures in the center of Chicago. Chicago’s Home Insurance Building remained the tallest skyscraper until 1890, when New York City usurped it with Joseph Pulitzer’s New York World Building, reaching a total of 309 feet.

In the early 1900s, the concept of the modern office started to take hold. American engineer Frederick Taylor designed the first office space in 1904, crowding workers together in an open environment while bosses looked on from private offices.

In 1913, President Woodrow Wilson pressed a button to turn on 80,000 light bulbs at the opening of the Woolworth Building – a publicity stunt worthy of the tallest skyscraper at the time. By 1916, skyscraper office buildings were beginning to be commonplace, and New York City passed the first zoning law in America to regulate skyscrapers. At this point, the electricity business was booming. By the early 1900s more than 30 different companies were generating and distributing electricity through the boroughs of New York City and Westchester County.

In our next post in this series, we will dive into the technologies that enable today’s buildings to move towards more comfortable and energy efficient spaces. Until then learn more about the systems that will drive the efficient and connected buildings of tomorrow here.

Tags: AC to DC, AC vs DC, building, buildings, Innovation At Every Level, InnovationAtEveryLevel, Keeping up with the Evolution of Buildings