This is the first post in a 3-part blog series looking at the high level of electrical risks present in many older residential buildings, including a proposed strategy for gradually upgrading the safety of those dwellings.

Each year in Europe, 16,000 persons are injured and 540 die due to electrical accidents, with more than 300 of those electrocutions occurring in western Europe. In Switzerland, Electrosuisse considers that the risk of death or injury with an electrical accident is 50 times more likely than with other types of accidents in the home. Beyond the risk of electric shocks, there is also the risk of fire. In Great Britain, the Electrical Safety Roundtable estimates that in 2014 through 2015, more than 5,600 accidental fires in dwellings were caused by electrical distribution systems. 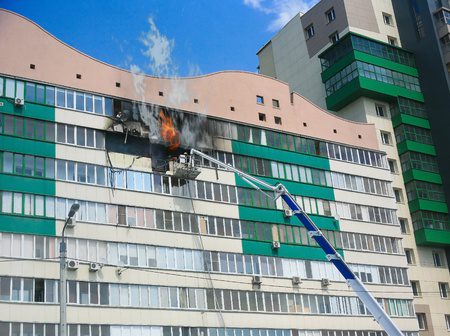 Catching up with safety standards

It’s estimated that 85% of dwellings were built before 1990. These older buildings may comply with the standards that were in place at the time of construction; however, during the 1990s significant changes took place in electrical standards. Prior to that time, some of today’s protection technologies were not available or required.

In addition, there was a massive growth in electrical consumption between the 1970s and 2010s, with a ten-fold increase in appliances per household, doubling consumption per capita in mature countries. This rising demand has put a lot of stress on older electrical systems, especially those where installations may not have been properly maintained or verified. The result is a wide range of potentially dangerous conditions facing owners and tenants.

The electrical installations in older buildings used and thus are aging. Temperature variations, humidity, UV (for outdoor use), wear and tear can cause plastic cracks, loose connections, conductors degraded insulation, or broken parts.

Changes of dwelling usage : numbers of inhabitants, presence of elderly people, young children, disabled persons, illness or even homework may need specific adjustments : such as increased number of socket outlets, additional heating systems. In some cases, such adjustments are done by an unqualified person.

As a matter of facts, older dwellings show many non compliant aspects, such as absence of a protective earthing conductors for socket outlets or the entire dwelling, absence of residual current devices in bathroom or outdoor socket outlets, outlets showing heat damage from overloading, fuses or circuit breakers not properly adapted to the cross-section of conductors, considerable number of extension cords or socket outlet sheared off.

Studies reveal a majority of dwellings at risk

In recent years, several countries have launched extensive safety studies on existing residential buildings. In Spain, a study of 1500 buildings concluded that 32% of the dwellings were unsafe and 35% were very unsafe. In Germany, a questionnaire to the inhabitants of 1300 buildings concluded that a majority of the electrical installations do not correspond to the current usage of electricity in terms of number of circuits, switches, and socket outlets. In France, a survey of 6000 residential buildings aged more than 15 years found that two-thirds of the dwellings show non-conformities. Worse, in the common parts of multi-family buildings, 83% of the buildings showed risks of electrocution.

From these studies, it can be logically concluded that the number of electric accident and electrically-related fire recorded each year are in some way a result of the high level of risks present in older existing buildings. This reveals an urgency to raise the level of safety of these buildings to current standards.

Fortunately, there are simple steps that can be taken to gradually improve electrical safety through a program of manual safety audits. In our next post, we’ll look more closely at how the application of fundamental safety principles can help better protect existing buildings.