What can a fast-growing school district in Alabama and a Texas metropolis teach schools and municipalities about escaping the deferred maintenance finance bind? Plenty. The biggest lesson from both of them can be summed up in three simple words: Have a plan.

In today’s environment of either extreme fiscal conservatism or outright funding shortfalls, experts say that having a plan is more important than ever. Consider the plight of schools: Experts now estimate the investment needed to modernize and maintain our nation’s school facilities is at least $270 billion, according to the American Society of Civil Engineers, which gives schools a D rating in its America’s Infrastructure Report Card.

Of course, with so many complicated and often misunderstood funding options, developing a financing plan that makes sense for your school or municipality is easier said than done. And without a trusted partner, you may not realize all the alternative financing mechanisms available.

Just ask the folks from Houston. In 2008, the city was faced with a Texas-sized challenge: Reduce and control energy consumption in the nation’s fourth largest city with help from the Clinton Climate Initiative, now known as the C40 Cities Climate Leadership Group. Using a combination of financing options — including internal and alternative financing — tied to an energy savings performance contract with Schneider Electric, Houston did just that. To date, the city has upgraded 44 buildings and will save $50 million over the course of the 15-year contract.

Houston’s leaders agree that key to success was the plan that Schneider Electric provided showing how the financing worked, plus their ongoing effort to help educate public officials all along the way.

Bond measure after bond measure was utilized for keeping up with the growth — at one point, so many new students were arriving, it was like adding a new school every year — leaving nothing to address the schools’ deferred maintenance issues and aging facilities.

The problems were especially acute with the major heating and cooling systems. The air quality was becoming a serious health concern. On occasion, teachers had to shuttle students during a lesson from classroom to classroom due to insufficient cooling or heating. The schools’ facilities staff was aware of these operational inefficiencies, which were costing the District more than a million dollars every year.

And yet, conventional funding methods to address these serious maintenance issues wouldn’t be available for five to 10 years.

What Madison County Schools needed was a plan. And that’s exactly what Schneider Electric provided.

After teaming with Schneider Electric, Madison County Schools went from nearly zero in maintenance upgrade funding to more than $14 million in alternative financing. The District is using those funds, along with a mix of other traditional and alternative financing that Schneider’s plan put together, to pay for the much needed heating and cooling improvements, along with a host of other infrastructure and technology upgrades. Those upgrades will reduce energy consumption by 40 percent, saving taxpayers approximately $1.5 million annually in utility costs — and provide healthier classrooms for students and teachers.

Over the next 20 years, the combined savings will amount to $40 million in capital savings. That’s money the School District can use to fund other needed improvements.

But when it comes to financing maintenance and energy upgrades — and thereby freeing up money for other priorities — many cities, counties and schools are still operating without a plan.

After years of neglect from the protracted recession and its aftermath, municipal buildings nationwide have fallen into dire straits. For these municipalities, it’s no longer a question of “if” the maintenance can be deferred, but rather “when” a vital service will be interrupted because of it.

The solution to breaking out of this cycle may be developing a similar plan to Houston and Madison County School District. With that plan, state agencies, municipalities and schools can turn to an alternative funding mechanism known as an energy savings performance contract. These contracts use guaranteed savings from energy and operational efficiency improvements to fund infrastructure and maintenance projects along with other alternative funding mechanisms that can create budget-neutral solutions.

However, these often complex financing methods can leave many officials confused and skittish about moving forward — if they don’t understand how the financing works and what makes most sense for their needs. But don’t let fear of the unknown keep you from escaping the deferred maintenance trap and achieving success like Houston and Madison County Schools. Partnering with a trusted and proven partner that can identify and secure alternative financing and help educate your community stakeholders is the first step in developing your own long-term energy and infrastructure improvement plan. 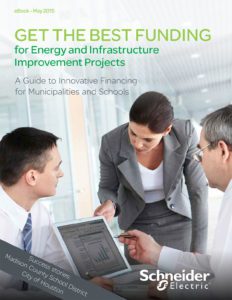 Learn more on innovative financing and hear first-hand from the City of Houston and the Madison County School District.