Reforming elements of the European building sector is considered by many as the ‘Holy Grail’ in the pursuit of carbon neutrality by 2050. Much of the focus is on improving the energy efficiency of European buildings with more electrification and digitization.

The electrification of everything

Electricity is considered the best path to decarbonization. The share of electricity in total energy use must double by 2050, with substantial electrification of transport and heat. That way renewables would make up two-thirds of energy consumption and 85% of power generation[1]. Together with energy efficiency, this will speed up Europe’s green energy transition.

But as 75% of Europe’s building stock is considered inefficient and targets are now in place to cut fossil-fuel powered heating by 75%, meeting Europe’s decarbonization challenge remains daunting.

Fortunately, today’s digitally inter-connected electrical systems use data and interoperability to eliminate waste and save costs. Studies show that electrification is consistently the lowest-cost solution to reduce carbon emissions in buildings. Buildings that use Electricity 4.0 technology to monitor energy use, control it better. The all-electric and all-digital buildings of the future sit on the frontier of low carbon innovation in transport, heating and cooling, and create a technology bridge between our digital and physical worlds. 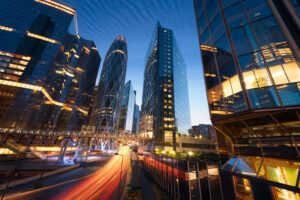 In parallel, Europe’s real-estate and buildings markets ─ which have shown little change over the last two centuries ─ will need to adapt. Fundamental disruption and a better-structured value chain should push all market players to get ready and create ambitious incentives to do so.

The Fit for 55 package introduced by the European Commission last July proposes a range of legally-binding decarbonization measures, including accelerated building renovation.

Even though policy negotiations are already underway, the new framework may only be finalized in two to three years. And despite repeated calls that European buildings (and transport) are the two priorities to urgently tackle this decade, EU countries may later relax the proposals as they focus on shorter-term issues.

Five years ago, when mandatory targets for deploying electric vehicle charging stations were proposed by the European Commission, many Member States chose to pass on what appeared as a problem for the future. Now, the EU faces a shortfall in charging capacity, and just three Member States own 70% of EV charging stations.

Proposals cannot be viewed as optional either, for Member States to pick and choose. Policymakers would be wise to agree on just a few principles that stand a better chance of being broadly implemented across Europe, such as:

Reshaping the building and construction industry

Transforming this sector can no longer be an elusive ambition but instead one of the strategic priorities in Europe’s industrial policy. The building and construction value chain should be comparable (in terms of political importance) to those for micro-chips, hydrogen, and batteries. Let’s not underestimate the importance and urgency of transforming and decarbonizing the European buildings sector.

The Energy Efficiency of Our Buildings Will Decide Whether We Meet Our Global Climate Targets! The Existing Building Stock Is of Key Importance.

Where Europe is, is there “ahead”?