One day of the year has started to appear earlier and earlier on the calendar: Earth Overshoot Day. This year falls on August 1st. Earth Overshoot Day marks the date when humanity’s annual demand on nature exceeds what Earth’ s ecosystems can renew in that year. What does this date mean?

This year, we will have exhausted our “resource budget” by August 1.  That means that after August 1, we’ll be borrowing from our future selves.  At our present rate of resource consumption, we would need 1.7 Earths to sustain us.

To translate people’s use of nature into quantified metric, Global Footprint Network adds up all human demands that compete for what the planet renews, or more precisely, it sums up all the biologically productive spaces needed to regenerate this demand. This is what we call humanity’s “Ecological Footprint”. It includes space for food, fiber, timber, waste absorption (particularly CO2 from fossil fuel burning), and space to accommodate our roads and cities. For details you can visit data.footprintnetwork.org.

This overuse is translated into a date that has moved from late September in 1997 to August 1st this year, the earliest date ever in human history. The world first went into overshoot in the early 1970s. This means that humanity is currently using nature 1.7 times faster than ecosystems can regenerate, akin to using 1.7 Earths. 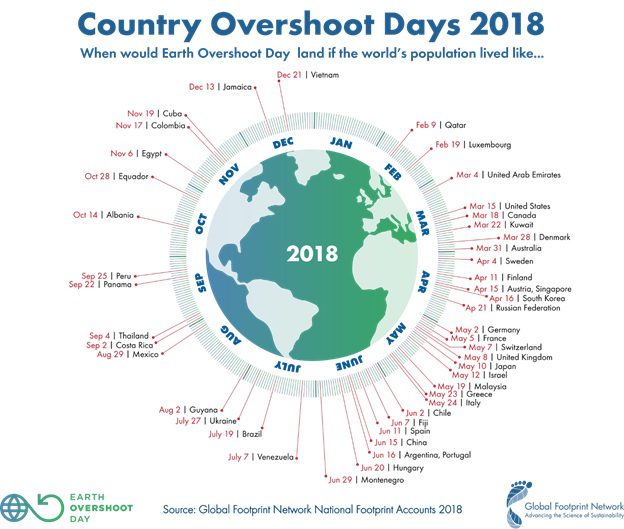 While our planet is finite, human possibilities are not. The transformation to a sustainable, carbon-neutral world will succeed if we apply humanity’s greatest strengths: foresight and innovation. The good news is that this transformation is not only technologically possible, it is also economically beneficial and our best chance for a prosperous future. If we moved Earth Overshoot Day 5 days back every year, we’d be below one planet before 2050. It is not that hard.

The company has calculated that if 100% of existing building infrastructure was equipped with energy efficiency and the electric grid was upgraded with renewable technology that is readily available, the world could move the date back by at least 21 days. Schneider Electric serves four key end-markets which account for about 70 percent of the world’s energy consumption, representing a significant opportunity to curb energy consumption and drive global economy’s planet-compatibility. It’s by engaging its customers and partners that Schneider believes is possible to unlock the potential to retrofit existing infrastructure, adopting circular business models, and measure how much this helps save resources and CO2.

On the energy side, the team estimated current decarbonization opportunities of the electricity systems, based on current grid limitations. They also estimated the Energy efficiency potential of current assets (buildings, homes, data centers, industries) should they use current technologies in this space. The energy retrofit and the decarbonization of electricity combined would move the date by 21 days. This is a conservative estimate as it is based on Schneider Electric’s tested off-the-shelf offering. In addition, technologies outside of Schneider Electric’s realm exist (e.g. lighting, air conditioning, motors and pumps etc.) to make those sectors even more efficient and move the date even further. On top of that, shifting people’s resource use habits also holds large potential.

The art is to use what already exists as effectively as possible. For instance, in Europe, buildings use typically represent 40% of entire energy consumption, generating almost the same percentage of the overall greenhouse gas (GHG) emissions. Here retrofitting is particularly important because it is not economical nor feasible to replace all the existing infrastructure. Consider these Schneider Electric examples: Installing active energy management systems in five different building types resulted in energy savings ranging from 22% in a private apartment (Paris area) built in 2010 to 37% at a three-star hotel in Nice area built in 1896 to 56% at a one-store primary school in Grenoble, France.

Move the date can be a business opportunity

Schneider Electric is among the few large companies who have a business case aligned with moving humanity out of ecological overshoot. With this, such companies have a baked-in economic advantage: On average they are aligned with the growing need of living within the means of our one planet. This exposes the companies to an expanding market, a feature that makes it much more likely for such companies to be successful in the long run compared to companies that are incompatible with one-planet prosperity and will inevitably face a shrinking demand, , more difficult access to scarce resources, and a tough time to maintain their social ”license to operate”

Unfortunately, businesses who recognize this physical reality and the implications of our one-planet context are still rare. Therefore, Global Footprint Network is proud to promote such companies because they are the most critical engines for the needed sustainability transformation. Obviously, for humanity develop peacefully, the majority of companies would need to have business models aligned with the reality of planetary constraints. And the vast majority of us should embrace this way of thinking, so as to influence our buying, eating, travelling patterns accordingly. The strategic thinking and business focus Schneider Electric displays, i.e., an approach informed by the characteristics of our physical reality, is what we wish to see become the norm, not remain an exception. 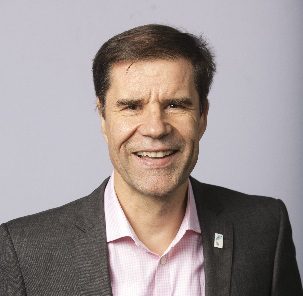 This article was co-authored by Mathis Wackernagel, Ph.D., who is the co-creator of the Ecological Footprint and CEO of Global Footprint Network. This international think-tank focuses on bringing about a sustainable human economy in which all can thrive within the means of one planet. Mathis’ awards include the 2015 IAIA Global Environment Award, the 2012 Blue Planet Prize, the 2012 Binding-Prize for Nature Conservation, the 2012 Kenneth E. Boulding Memorial Award, the 2011 Zayed International Prize for the Environment, an honorary doctorate from the University of Berne, and a Skoll Award for Social Entrepreneurship.

Are you Going Green to #MoveTheDate of Earth Overshoot Day?

The Earliest Earth Overshoot Day. Ever.

Bold Ideas for Financing and Regulations to Close the Energy Gap