The prevalence of green buildings is growing all around the world, encouraged and frequently even required by both client demand and government policies. The net-zero energy goal being widely adopted requires a significant reduction of building energy consumption as well as the integration of clean, renewable local generation. I described this two-pronged approach in general in the previous post in this series. 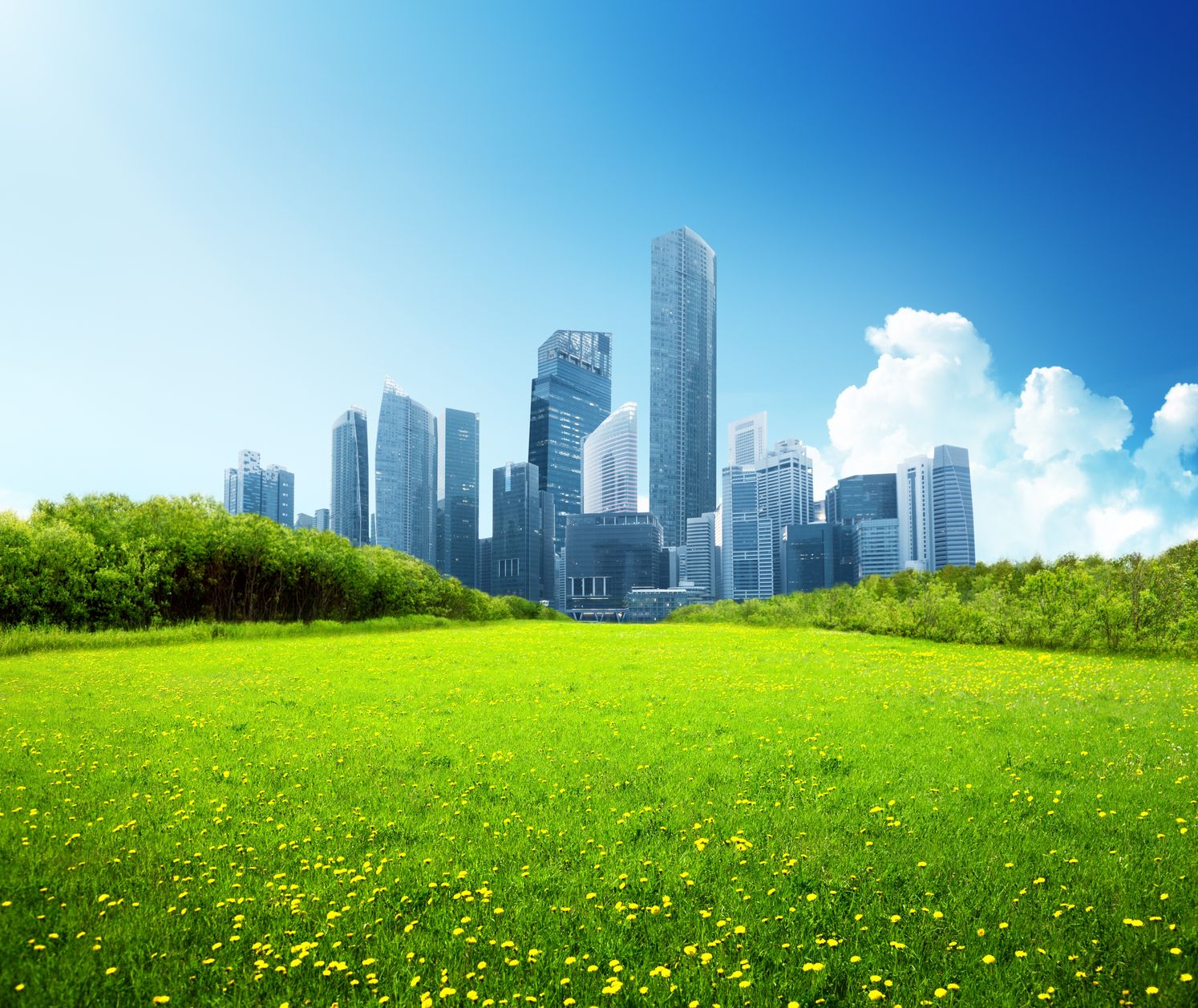 Although reducing energy use is important, the truly exciting prospects for managing building energy needs lie with incorporating renewable energy resources into the built environment. Several renewable technologies that are commercially available today can completely cover the consumption needs of buildings. Consisting primarily of photovoltaic (PV) and wind turbine systems, these renewable technologies are, however, variable, intermittent energy producers. To achieve the overall objective of mastering and optimizing energy use while also becoming more independent of the electrical grid, these energy resources can be coupled with storage or other more stable electricity generation technologies, such as combined heat and power generation (CHP). This post examines the various ways to achieve net-zero energy in buildings.

Photovoltaic (PV) is the leading renewable energy technology for buildings. PV energy production has several benefits: solar energy is unlimited and available worldwide; it does not emit greenhouse gases (GHG) or other pollutants during operation; PV panels are silent; and PV systems require little maintenance. To make the technology even more attractive, the cost of PV systems has significantly decreased in recent years and the technologies also have become more efficient.

Photovoltaics are a good fit for buildings where they can occupy the unused rooftop area. Alternatively, they can use the car parking space, where in addition to producing energy, they provide protection to cars and individuals from sun and rain. Another option for new PV installations is to integrate them into the building architecture in what has become known as building integrated photovoltaics (BIPV). The Edge, the Amsterdam headquarters of Deloitte Netherlands that I referenced in my previous post, is an example of a building that uses BIPV.

One common concern is whether the rooftop area is large enough to hold a PV system that will cover the energy needs of the building. Studies show that the majority of buildings have the technical potential to achieve the net-zero energy goals by covering 50% of their rooftop with photovoltaics – and many of them could produce even more electricity than they consume. Of course, this depends on several parameters such as the building’s location, how many floors it has, its principal use, and its plug and process loads. Some subsectors, such as warehouse, retail, and education, offer better opportunities to achieve the net-zero-energy building goal than other subsectors, such as hospitals, food services, or laboratories. For more insight into this aspect of achieving net-zero energy, see “Assessment of the Technical Potential for Achieving Net Zero-Energy Buildings in the Commercial Sector,” published by the National Renewable Energy Laboratory of the U.S. Department of Energy.

Co-generation, or combined heat and power (CHP), is an energy production system generating both electricity and heat from a single primary source. This technology is a good fit for buildings or complexes of buildings (e.g., a campus) where it answers the demand for heat and in addition generates electricity. As a proven energy-efficient technology, CHP increases the primary energy utilization and reduces the greenhouse gas emissions.

Is cogeneration a renewable technology? Not really, but it is an effective approach to energy efficiency and CHP systems can use renewable technologies as a primary source. Possible fuels include biomass (biogas and biofuel) and geothermal for clean, low carbon footprint thermal and electrical energy production. In such a way, cogeneration can contribute to the integration of renewable energies in buildings.

Wind turbines: yes, but not in buildings

Wind turbines are another fast growing renewable energy technology. Despite their huge energy potential, not many wind turbines are found on car parks or on building roofs. And when they are, they typically are characterized by a small production capacity, usually not exceeding 10kW.

Because wind turbines are designed to be efficient in an environment characterized by uniform and relatively constant wind flow, they often are located on open plains, hills, close to the sea, or offshore, usually in a group of wind turbines forming a wind farm.

On the contrary, wind conditions in urban environments are highly variable and quite turbulent, which significantly decreases the standard wind turbine’s efficiency. Noise and vibrations are an additional challenge to using wind turbines on buildings. Although efforts continue to develop smaller scale wind technologies designed specifically for urban environmental conditions, which could lead to their greater adoption in urban areas, building-scale capacities are not likely in the foreseeable future.

Storage: adapt to the variable nature of renewables to optimize energy use and master the energy bill

Renewable energy sources provide CO2-free electrical energy, but also have some drawbacks – most significantly the variability of energy production depending on weather conditions. Electrical energy storage systems enable storage of renewable energy from peak production periods and use of that energy when demand exceeds production. In addition, electrical storage systems enable multiple features and services including the optimization of energy billing; voltage and frequency support to the grid; and even the operation of the building’s electrical system, or part of it, in the case of power outages. This is a subject we will discuss further in a subsequent blog post.

Equipment that allows for storage of excess electricity generated during peak periods is still in growth mode. Although not strictly speaking a renewable resource, as this type of enabling technology grows in capacity and reliability, it is allowing users to more comfortably rely on renewable energy sources with less concern about their variable production rates.

We have reviewed several local electricity generation technologies for buildings. Each of them can be used independently and the choice of one or another will depend on the building potential and its objective—reduction of CO2 emissions, energy consumption, or return on investment. However, buildings engaged in developing their sustainability often opt to include a combination of these technologies. This is a good way to maximize their respective benefits, especially when the energy they produce is directly consumed by the building loads.

Buildings that couple a photovoltaic system with on-site storage and are also associated with another technology—CHP, wind electricity production, or other local energy resources—offer great flexibility in using or providing services to the electric grid.

Control and optimization solutions play an important role in optimizing the way energy is being produced, consumed and stored. A first layer of control, called the Energy Management System (EMS), is key. Usually cloud based, these systems are able to forecast and optimize energy usage, leveraging on-site distributed energy resources to reduce energy bills and better integrate renewables. In addition to an EMS, a Power Management System can be used to operate the system on-site.

In the past electricity was supplied only by the grid, but today electrical energy for buildings and other users is provided by multiple sources—PV, CHP, wind, storage and others. On-site PV generation and storage capacity can be used to provide services to the grid, to provide additional capacity during peak demand, or contribute to the voltage/frequency regulation. One example is Kergrid, the headquarters building of the Syndicated Department of Energies of Morhiban (SDEM).

SDEM is the energy union that coordinates the electrical supply for the more than 200 municipalities in the Brittany region on the northwest coast of France. Because only 10% of the region’s electricity is generated locally, many of the office buildings in this 2,600-square-mile (6,800 square kilometer) area are expected to incorporate renewable energy sources in the near future. As a result, grid management is becoming both more important and more complex.

Located in Vannes, Kergrid was built as the first smart grid-ready office building in France. Equipped with 850 square meters of roof-mounted PV panels that can produce up to 126 kW of electrical power and two small wind turbines, each capable of producing 2.5 kW, the building can reduce its demand on the grid during peak periods. It also has storage capacity of 56 kWh, enough to power the entire building for up to two hours.

Management of the contributions to and use of the electrical energy in the subsystem is being accomplished using Schneider Electric’s EcoStruxure™ Microgrid Advisor. This powerful cloud-based, demand-side energy management software platform allows users to collect, forecast, and automatically optimize the operation of distributed energy resources (DER) using predictive algorithms. Click here for more information about EcoStruxure Microgrid Advisor.

The next post in this series will cover, “Self-consume or grid export? What to do with photovoltaic energy, and why your decision matters?”