The variety of cloud software and platforms has exploded in recent years thanks to features such as scalability, flexibility, on-demand services, and cost-effectiveness. From email, human resources, IT security and data storage to file-sharing and CRM solutions, doing business via the cloud is fast becoming the new normal.

But what’s the state of cloud security? What do business leaders think about the cloud and emerging technologies? Are companies leveraging cloud-security applications to protect their data, devices, and IT infrastructure? What barriers do they face in implementing these solutions? We recently surveyed 300 IT and Security leaders – in industries ranging from construction to healthcare to professional services – to hear what they have to say.

The Cloud and Cloud Security

We found that overall, most of them — 57 percent — believe the cloud is secure. That number rises significantly when just looking at just the companies in the IT/tech sectors: 78 percent of these respondents trusted the cloud.

Not surprisingly, more companies are also leveraging cloud security: 53 percent of those surveyed currently use cloud-security applications. When asked about their reasons for trusting the cloud, comments include, “It has proven that it works for us” and “We use encryption technology in our cloud applications.” 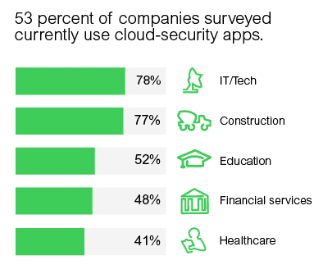 Cloud security is not a new phenomenon, though its adoption has risen in recent years. The survey shows that 8 percent of companies have used cloud security for five years or more, and 52 percent have leveraged cloud-security software for one to two years. Companies in the IT/tech (78 percent) and construction fields (77 percent) report the highest rate of adoption. In comparison, 41 percent of organizations in healthcare and financial services use cloud-security software.

State of Security Systems and a Golden Opportunity

Almost all of the company leaders surveyed – 95 percent – encourage the adoption of new technologies. That bodes well for cloud security and other emerging technologies, such as the Internet of Things. 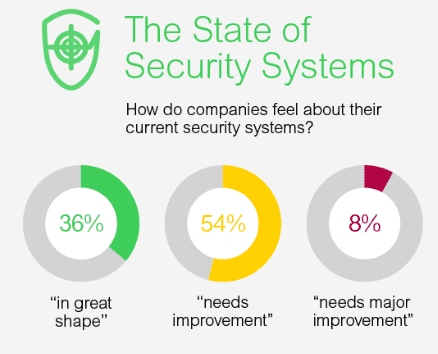 This information shows security providers have a golden opportunity to more effectively communicate the benefits of their solutions. In fact, almost half of the companies – 45 percent – are open to the idea of adopting cloud security, saying they are “likely” or “extremely likely” to transition their security operations to the cloud in the future.

Here are the top three barriers that companies say prevent them from achieving their security goals:

As the adoption of cloud reaches new levels, security issues concerning the cloud have come to the forefront.

About 56 percent of companies surveyed said the possibility of hacking is a major concern, while 18 percent say that they don’t trust the cloud. The survey found that company perceptions differ by field. For example, 27 percent of those in the construction and trade said they do not have any concerns about cloud security.

To address the markets’ concerns, cloud-security providers and security providers, in general, need to better communicate the safety of their products, mandating features such as encryption, data-loss prevention, and strengthening cybersecurity capabilities.

For more information about our survey, download “Security in the Cloud,” for an executive summary and to see the comprehensive set of findings, including annual security investment, preferred security features, and overall cloud usage.

And if you’re looking for a cloud-security solution, learn about AccessXpert, our secure, mobile, cloud-based access platform.

The Endless Debate: Is the Cloud Secure? – Part 1 of “Moving to the Cloud”