Commercial buildings dominate the modern landscape in more ways than one.

I mean they’re more than just big to the eye. They’re big in terms of energy, too. So in this post, I’m covering some energy-related regulations that impact buildings. In the next post, I’ll go over solutions and additional benefits.

Right now, though, let’s talk about the size of buildings, energy-wise. According to the United Nations, buildings produce up to 30% of greenhouse gases and consume up to 40% of all energy.

You can’t get there without buildings playing a critical role.

And if building owners, operators, tenants and occupants think this is all some future concern, I’ve got some news. Regulations are already rolling out, with these intended to hit intermediate goals and then, finally, the ultimate one in 2050. 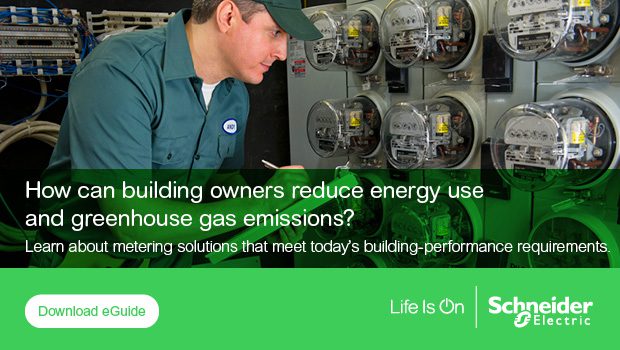 For instance, there’s the EU’s energy efficiency directive. Its binding measures apply to all stages of the energy chain. The goal is to increase energy efficiency by 20% and get 20% of all energy from renewables by 2020. (I wonder if they went with all those 20s to make things easier to remember.)

For a North American version of the same, consider the California Energy Commission’s Title 24. The Commission says its regulations have saved consumers billions in energy costs. So, it’s not going to stop mandating greater energy efficiency, as can be seen in the fact that it’s already into pre-rulemaking for its 2019 standards.

For buildings, a big point about Title 24 is that electrical power distribution systems must measure loads downstream of the service meter. We’re not talking only about big loads, like heating, ventilation and air conditioning (HVAC) or lighting. The regulations also mandate metering of tenant areas and lobbies. For large buildings, those with a service rated at more than 1000 kVA, metering must give at the time and historical peak demand.

The idea in both Europe and America is that  you know where energy is going, and then you can take steps to cut consumption. And if you do try to cut consumption, you’ll have data to confirm that what you did worked. If it didn’t, you’ll know that, too.

So, the larger picture of meeting greenhouse gas reductions means that more targeted metering is coming. In some locations, like the UK, solutions to reduce greenhouse gas emissions are being applied to new and old buildings. For a retrofit, the new solutions must be implemented if the building is expanded or if there’s a change in use.

Given that buildings are in use for decades, it’s likely regulators elsewhere really won’t have any choice. Even if mandates today only apply to new buildings, eventually the drive to cut emissions will run into a reality: there’s no way to get there without targeting existing buildings as well.

As I said, commercial buildings loom large in this landscape. Don’t worry, though. In my next post, I’ll go over solutions. And I’ll also discuss benefits, which go far beyond meeting mandates.

If you are looking for more details, you can check out the following documents:

INFOGRAPHIC: Electricity Compared to other Energy Sources in Commercial Buildings