This week’s weather headlines are downright scary: the Weather Channel warns of the “Dangerous Situation on Tap for Southwest” and CNN notes that “Heat Scorches One Part of US.” My wall on Facebook is filled with friends posting photos of triple digit temperatures; the latest being 125 degrees Fahrenheit (51.6 degrees Celsius) in Las Vegas, Nevada. A friend of mine can’t figure out if her air conditioner is broken, as it won’t cool her space quickly enough.

Having been a part of the Schneider Electric family since 2000, it’s difficult for me to hear about the extreme summer heat occurring without thinking about how energy management fits into the equation. What are some ways that energy efficiency and conservation measures could help during a summer heat wave? 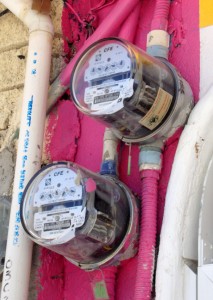 I can recall one of the first lessons that I learned in my new hire training—I was right out of university—was the concept of consumption and demand on a utility bill. Consumption (kWh or kilowatt hour), the amount of total energy used, will obviously increase during hot summer months, but it is not the worst thing about a heat wave.

Demand (kW or kilowatt), often called peak demand, is the amount of capacity required at any time during the billing period. A colleague of mine explains demand as a water pipe: the amount of water that can flow through the pipe depends on the size of it. When the temperatures rise, the demand will spike, even if for a very short amount of time. If you’re on a ratchet rate, that peak number will then be set as the demand or capacity required for an entire year—which is a big component of an energy bill!

So what can an individual consumer do to offset these high temperatures and subsequent increase in energy consumption and demand? Obviously, programmable thermostats are an easy and affordable option, as long as a user can figure out the right mix of comfortable temperatures and scheduling.

A Building Management System (BMS) is more savvy option, which can not only do what a programmable stat can, but can also offer energy conservation measures, such as:

These are just a few examples of how a BMS can be leveraged to reduce consumption and demand, which will save both energy and money! Other options include demand response and leveraging the smart grid. Now, I’m going to find a nice cool spot to continue my workday and stay out of the summer heat.