I have often wondered why companies that wanted help with their energy projects wanted to skip the most essential part of project.  I have seen it many times when a customer said “we already have a BMS (Building Management System), I don’t need any other meters.”  The point of this article is not to bash BMS systems.  Those systems serve an important purpose in energy management strategies. The focus of this is to show how metering with power quality functions is the true backbone of successful energy projects and energy security.

Advanced metering infrastructure (AMI) systems are typically installed and commissioned after a building has been in use.  Almost all commercial buildings have BMS systems that are commissioned when the building is turned over to the tenant.  So why is there this need for two separate systems? 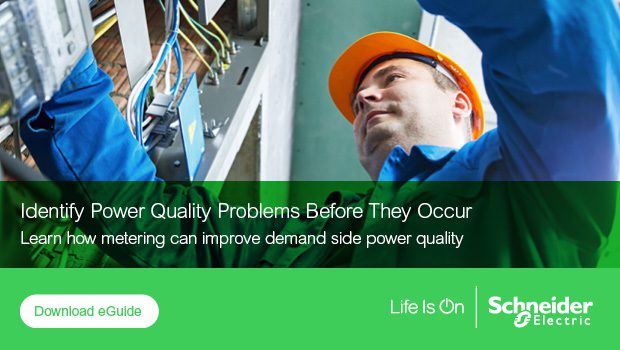 Last fall, I received a phone call from an Air National Guard base that was having an AMI system installed next to their BMS.  The energy manager from the base called me to ask why he needed two systems.  Before I was able to answer, the installer, who was also on the call, spoke up about how this system would help them make their BMS more efficient.  This call was a moment of clarity about metering projects.  The two systems are complimentary rather than overlapping.  The installer proceeded to explain that the information gathered in the AMI meters gave the base a roadmap for their energy plans.

This roadmap was the key to properly tuning the BMS because it showed how power quality was affecting the BMS performance.  The energy manager remembered that a particular building had “never performed” well no matter how many timed the BMS system was tuned or reprogrammed.  The AMI system was able to give him the information to diagnose the problems within a day of commissioning power quality meters.

A few months later, the installer on this job made a trip to one of Schneider Electric  power quality training classes.  He told me that AMI systems not only compliment BMS systems but also generate more successful work for his business.  He explained that every site he has installed AMI with a BMS, it generates three times the work on the BMS system than those customers who don’t know their power quality.  When I asked him about his customers’ energy savings and overall satisfaction with their two systems, he responded “night and day.”  The customers who utilized power quality data to tune and commission their BMS system see far more savings in their energy bills and fewer maintenance problems. This is why Schneider Electric has installed over 20,000 power quality meters in systems for agencies of US Federal Government since 2008.

It is important to understand how much energy your facility consumes.  Either a BMS or an AMI system can measure consumption.  AMI is the only way to capture power quality which is the roadmap to a successful energy plan.