As we all turn our calendars over to a new year, the motion picture industry’s award season is about to pick up momentum. Soon, media outlets will be inundated with news about the Golden Globes and the BAFTAs. Personally, I enjoy watching each of the films nominated for best picture to select my personal winner, not to mention my guilty pleasure of checking out the stars and styles on the red carpet.

Last month, in the busy days before the end of 2011, there was a different type of award show: the Gigaton Awards. This prize is touted as the “Premiere Global Award for Outstanding Performance in Corporate Carbon Reduction and Sustainability” and its winners were announced during a ceremony at the COP17: the World Climate Summit.  Like the Oscar’sAcademyofArtsand Motion Picture Sciences, the Gigaton Awards are selected by an Academy made up of CEOs of leading global organizations and leaders within the sustainability movement.

On December 3, 2011, this Academy named their 2011 Gigaton Award winners, and I was ecstatic to learn that my company, Schneider Electric, was among the awardees. The Gigaton Awards have six categories, plus a special recognition for a specific country. Drum roll please…and the winners are: 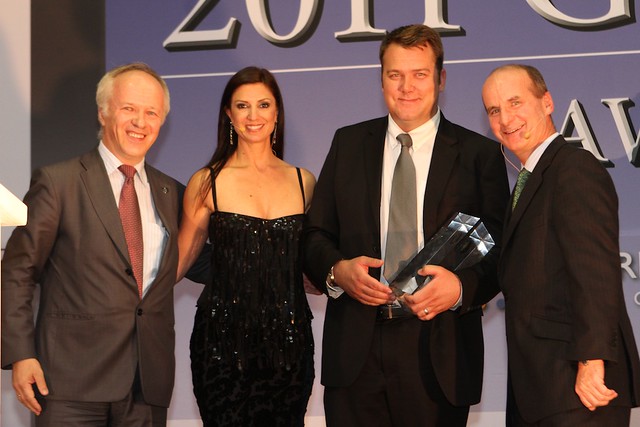 While the most prestigious award went to SunTech, a global solar leader, I am very proud to be associated with an organization that won its category for leadership in developing the smart grid and energy efficiency. As a member of a global team promoting green buildings, this is concurrent with our charter to deliver high-performance buildings that achieve sustained results over time.

So after the 2012 movie award season is behind us, and the last starlet has walked the red carpet, I will think of the Gigaton Awards and winning companies that are working to make a difference in the environment. And I will smile to myself as I think of Schneider Electric as one of the winners in 2011, walking down a green carpet to accept its award.